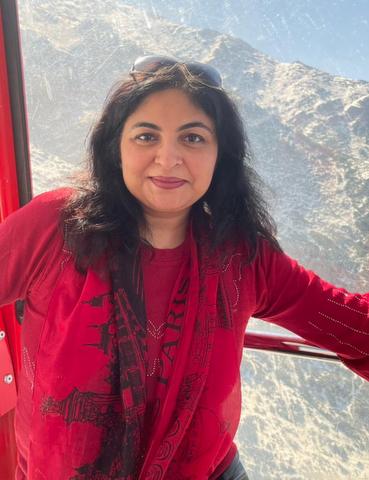 Surbhi Dahiya is a professor at the Indian Institute of Mass Communication (IIMC). She has served as Course Director of the Department of Journalism for many years. She has also worked in different academic institutions like Delhi College of Arts and Commerce in various capacities, as well as her professional career in the media industry, where, for example, she worked as a reporter at The Tribune.

In this article, Professor Dahiya talks about her experiences as an IAMCR ambassador.

Please tell us about your connection with IAMCR.

I firmly believe that IAMCR is one of the most genuinely diverse international associations in our field. This is why I always do my best to participate in the IAMCR conferences. I have met a lot of great colleagues who always motivated me and whose valuable ideas inspired me and my work. I have learned a lot from IAMCR, and I believe that other Indian scholars should also develop a rapport with the association.

I am also active in the Journalism Education Research Section (JRE) and Political Economy Section (POE) of IAMCR. I chair one or two sessions every year, present papers, and review other’s research papers. For example, I chaired a session of JRE at the IAMCR 2022 conference and another session at the IAMCR 2021 conference. Besides these, I review the paper submissions to the section journal of POE entitled the Political Economy of Communication. I have also recently participated in the JRE Book Launch Webinar; two of my books were launched there.

My activities in the association also inspired me to try to contribute to the increase of representation from different countries. I feel like I have always been a part of IAMCR; this is why I always try to increase the association's visibility in India to inspire other colleagues to benefit from the association’s diverse and inclusive nature.

What motivated you to become an IAMCR ambassador?

My first motivation to become an IAMCR ambassador comes from my vision and mission of life, which is training media educators as well as students. After participating in several international conferences, such as the IAMCR conferences in Leicester and Montreal, the AEJMC conference in Chicago, the ICA conference in Prague and the AMIC conference in Dubai, I realised that Indian media scholars have limited international representation and networking, although their contribution to the field is significant. I decided to work towards this, and I noticed that if I became an IAMCR ambassador, I could increase the global visibility of Indian scholars and motivate other scholars to participate in international fora. That was my primary aim.

Could you please share your experiences as an IAMCR ambassador?

IAMCR is an internationally recognised body, and it is a privilege and honour for me to work as an IAMCR ambassador. My primary aims were twofold, first, to contribute to the increase of the membership and second organise academic events.

When I was appointed as an ambassador, I received a positive response from the Indian media educators. The media coverage for this news was also great; around thirty-five to forty news items about my appointment as an ambassador were published on different media platforms. This also provided an excellent opportunity to introduce IAMCR through this media coverage. Many people approached me from various regions and countries to find out ways to collaborate. Also, I have received queries from people planning to become IAMCR members, and in a very short period, around forty people registered as members. I was happy to see that the first step was accomplished.

Then, I focused on the organisation of various academic events. First, I planned a regional panel discussion on the status of media education and research in India. Dr Padmakumar K, the IAMCR Faculty Ambassador in India, also participated in the organisation of this event as the co-convenor. Several critical names of media and communication studies in India came together at this event and discussed the contemporary themes, developments, challenges, and future directions for conducting high-quality research in India. That event was highly appreciated, and hundreds of educators and students joined.

Also, together with the IAMCR PhD Ambassador Priyanka Sachdeva, we organised a no-travel event during the IAMCR conference period called Regional Conclave in collaboration with the IIMC. The theme for that event was the same as the conference’s theme, Communication Research in the Era of Neo-Globalisation: Reorientations, Challenges and Changing Contexts. Although we had a limited budget and had to limit the number of participants accordingly, we managed to host the event with 130 participants from different universities and regions.

For the upcoming year, we are planning to organise a national event. Hopefully, we will have more chances to collaborate with the other ambassadors from other countries.

I think that students and other interested people should be able to benefit from the lectures, so I started a YouTube channel. Currently, I have around 15 videos on my channel that are related to my field of expertise that materialised in several books. With these videos, I aim to encourage the students of media and communications studies and early-stage scholars to get more accustomed to the theories, practices, and technologies of our field. I feel that if I manage to guide early-stage colleagues to enter international platforms, it will be an honour for me.

Absolutely. There is no doubt about it. I always recommend the people who are actively involved in the IAMCR’s activities to consider becoming an ambassador. This is a unique opportunity to encourage researchers and media educators to present at the international level. I think many people are doing very high-quality research. I want this research to be presented internationally because bringing high-quality research to an international level can contribute to our field's reach, scope, and quality. I always believe that we can only improve the quality of research throughout the world and in every individual country if we manage to work together. I also think that ambassadorship is a suitable position to fill the gaps within the field and between the researchers.

I am delighted to work for IAMCR with our valued colleagues. I think IAMCR is a well-established international association for communication and media research. I think it is an honour and a privilege for me to work as an ambassador. So, I encourage other colleagues to communicate with me to find ways of collaboration from which I believe everyone can benefit.

Professor Dahiya holds her PhD degree in media management and two master’s degrees to her credit. She aims to expand her network by interacting with various stakeholders in the field of communications and media. She delivers lectures and training at multiple levels to state institutions such as the defence forces, Government Officials and corporate organisations like TATA and NTPC, as well as various national and international universities and colleges. She was a SUSI scholar (from India) in the United States in 2017. She has chaired several sessions and presented papers at international conferences.

She authored several books that significantly contribute to the field of communication and media studies and deserve a wide readership. Her latest book, Indian Media Giants: Unveiling the Business Dynamics of Print Legacies, was published by Oxford University Press in 2022. This is an analytical chronicle of six Indian mega media conglomerates’ odyssey from their humble, incipient beginnings in the pre-independence era to their transformation into powerful business empires in the digitised world. Another book she wrote, The House that ZEE Built, was published by Rupa Publications in 2021. It tells of the legacy of India’s pioneering media enterprise. The book traces the story of an agri-business’ growth into the country’s first satellite television channel and further branching into a media conglomerate whose fingers are dipped in news, entertainment, and many more. Her third book, Beat Reporting and Editing: Journalism in the Digital Era, was published by SAGE Publications in 2021. It offers an extensive and pioneering study of the reporting for all the news beats, news writing, editing and emerging technologies in journalism.

Professor Dahiya also has a YouTube channel where she shares her lectures with people interested in journalism, communication and media research.