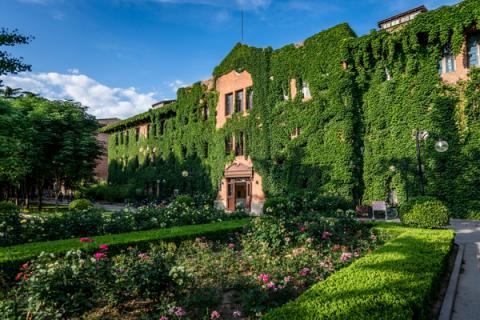 Located in Northwest Beijing, Tsinghua University has over a hundred years of history. It was established in 1911 as a preparatory school for students who were sent by the Government to study in the United States. The university has nurtured China’s earliest faculty that greatly valued the interaction between Chinese and Western cultures. In 1925, Tsinghua launched its four-year undergraduate program. In the autumn of 1929, its graduate school was set up. Tsinghua is now renowned as a unique comprehensive university bridging China and the world, connecting ancient and modern, and encompassing the arts and sciences.

The campus of Tsinghua University is located on the former site of the Qing Dynasty’s imperial gardens, it retains Chinese-style landscaping as well as traditional buildings. The campus is famous for the beautiful surroundings embraced by shady trees, lotus ponds, and time-honored architectural complexes with different features and styles. It was listed as one of the “World's Most Beautiful College Campuses” by Forbes Magazine, the only one from Asia.

Throughout its history, Tsinghua University has generated numerous political, business, and innovative leaders, whose names are interwoven with the development of China and beyond. For instance, both former and current president of China, Mr. Hu Jintao and Mr. Xi Jinping are Tsinghua alumni. Tsinghua has also nurtured and attracted a large number of outstanding experts and scholars, including the earliest Chinese Nobel Prize winners Chen-Ning Yang.

Tsinghua is one of the best universities in China for the high quality of teaching, research, and social service. The university has 20 schools and 58 departments with faculties in science, engineering, humanities, law, medicine, history, economics, education and art. By the end of 2018, Tsinghua has 51 members of the Chinese Academy of Sciences, and 39 members of the Chinese Academy of Engineering. Over the years, Tsinghua holds the largest number of the professors of the State Key Laboratories, of the national research awards in the science and technology, of research funding, of patents authorized, and also of the article indexed in EI (Engineering Index), ISTP (Index to scientific & Technical Proceedings), and SCI (Science Citation Index). Tsinghua has a Nobel laureate, as well as winners of A.M. Turning Award, Fields Medal, Wolf Prize, Crafoord Prize and Gregori Aminoff Prize, and two Future Science Prize winners.

Tsinghua has also been recognized as one of the top universities in the world. It is ranked 23st in the world (1st in Asia) in 2020 Times Higher Education World Reputation Rankings and is ranked 16th in the world in 2020 QS World University Rankings. Also, Tsinghua has 4 subjects ranked within top 10 according to the U.S. News Best Global Universities for subject 2020, including Engineering, Computer Science and Civil Engineering and Chemistry.

Over the past over 100 years, Tsinghua University has witnessed and shared the hardships and glories of the nation. The University’s motto of “Self-discipline and Social Commitment” has inspired many generations of Tsinghua teachers and students to struggle for the prosperity of China.

Today, Tsinghua is the home for over 40000 students from more than 120 countries. With a dynamic international community, students enjoy their campus life and cultural experience. As one of China's most prestigious and influential universities, Tsinghua University continues to dedicate itself to the development of China and the world with wisdom and strength in various fields.

Notice regarding use of IAMCR 2022 conference papers and videos