Looking for Alicia: The Unfinished Life of an Argentinian Rebel 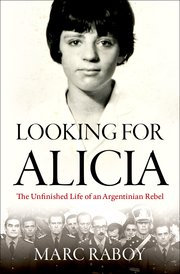 The life and legacy of a young Argentinian woman whose disappearance in 1976 haunts those she left behind.

Marc Raboy always felt a "subliminal interest" in Argentina. His grandfather had left his village in Ukraine in 1908 as a young man and spent a year in Buenos Aires, before returning home, marrying, and then emigrating to Canada, where Raboy was raised. While planning a trip of his own to Argentina, Raboy did an Internet search of his surname there, on the off-chance that he might discover some tie to his grandfather.

In the process he found Alicia Raboy. Her story immediately seized him and wouldn't let him go. In June 1976, Alicia, a journalist and member of a militant underground leftwing group, the Montoneros, was ambushed by a security death squad while driving with her family in the city of Mendoza. Alicia's partner, the celebrated poet and fellow Montonero Francisco "Paco" Urondo, was killed on the spot. Their 11-month-old daughter, Ángela, was taken and placed in an orphanage. Her daughter ultimately was rescued; Alicia was never heard from again.

In Looking for Alicia, Raboy pursues her story not simply to learn what happened when the post-Perón government in Argentina turned to state terror, but to understand what drove Alicia and others to risk their lives to oppose it. Whatever their distant ancestral kinship, author and subject were born a month apart, sharing not only a surname but youthful rebellion, journalistic ambition, and the radical politics that were a hallmark of the 1960s everywhere. Their destinies diverged through a combination of choice and circumstance.

Using family archives, interviews with those who knew Alicia, and transcripts from the 2011 trial of former Argentine security forces personnel involved in her disappearance, Raboy reassembles Alicia's story. He supplements his narrative with documents from Argentina's attempts to deal with the legacy of the military dictatorship, such as the 1984 report of the National Commission on the Disappearance of Persons, Nunca Más ("Never Again"), as well as secret diplomatic correspondence recently made public through the U.S. State Department's Argentina Declassification Project. Looking for Alicia immerses readers in these dark years, which, decades later, cast their shadow still. It puts an unforgettably human face to the many thousands who disappeared, those they left behind, and the haunting power of the memories that bind us all to them.

Marc Raboy is Beaverbrook Professor Emeritus in the Department of Art History and Communication Studies at McGill University, and long term IAMCR member.