Ethical Responsiveness and the Politics of Difference 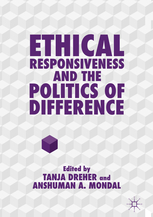 Edited by Tanja Dreher and Anshuman A. Mondal

This edited collection focuses on the ethics, politics and practices of responsiveness in the context of racism, inequality, difference and controversy. The politics of difference has long been concerned with speech, voice and representation. By focusing on the practices and politics of responsiveness—listening, reading and witnessing—the volume identifies vital new possibilities for ethics and social justice.

Chapters focus on the conditions of possibility, or listening as ethical praxis; unsettling or disrupting colonial relationships; and ways of listening that highlight non-Western traditions and move beyond the liberal frame. Ethical responsiveness shifts some of the responsibility for negotiating difference and more just futures from subordinated speakers, and on to the relatively more privileged and powerful.

"This exciting and well researched volume offers a conceptualization of ‘responsiveness’ that will make an enormous contribution to knowledge. In its pages, political responsiveness functions as a supplementary valence to shed new light on by now well-worn debates about voice, silence, and listening. Particularly commendable are the collection’s broad and intelligent coverage, the impressive line-up of scholars, and the timely and urgent topics addressed (these include Rhodes Must Fall, 9/11 and the rise of Islamophobia, Indigeneity, the resurgence of populism, and the global refugee crisis). The emphasis contributors place on the need for settler colonialists to listen, and their attentiveness to gender are especially welcome.” (Claire Chambers, Senior Lecturer in Global Literature, University of York, UK)

1. From Voice to Response: Ethical Responsiveness and the Politics of Difference, Tanja Dreher and Anshuman A. Mondal
2. Locating Listening, Tanja Dreher and Poppy de Souza
3. On Liberty on Listening: John Stuart Mill and the Limits of Liberal Responsiveness, Anshuman A. Mondal
4. Listening with Recognition for Social Justice, Cate Thill
5. Freedom and Listening: Islamic and Secular Feminist Philosophies, Allison Weir
6. When the Students Are Revolting: The (Im)Possibilities of Listening in Academic Contexts in South Africa, Anthea Garman
7. Who Laughs at a Rape Joke? Illiberal Responsiveness in Rodrigo Duterte’s Philippines, Nicole Curato and Jonathan Corpus Ong
8. Watching to Witness: Responses Beyond Empathy to Refugee Documentaries, Sukhmani Khorana
9. Facing Vulnerability: Reading Refugee Child Photographs Through an Ethics of Proximity, Anna Szörényi
10. The Anti-Festival: Kimberley Aboriginal Cultural Politics and the Artful Business of Creating Spaces for Kardiya to Hear and Feel Across Difference, Lisa Slater
11. Silence as a Form of Agency? Exploring the Limits of an Idea, Bina Fernandez
12. Noble Speech/Thunderous Silence: Toward a Buddhist Alter-Politics, ShinEn Wong
13. Indigenous Research Methodologies and Listening the Dadirri Way, Lisa Waller

Dr.Tanja Dreher is Associate Professor in Media at the University of New South Wales in Sydney, Australia. She is co-chair of IAMCR's Community Communication and Alternative Media Section.