Ethnic Media in the Digital Age 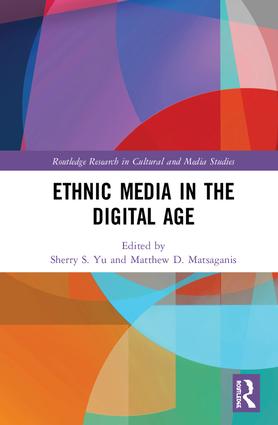 Ethnic media are media produced for, and frequently by, immigrants, ethnic and linguistic minority groups, and indigenous populations. These media represent a sector of the broader media industry that has seen considerable growth globally, even while many mainstream, legacy media have struggled to survive or have ceased to exist, largely due to the emergence of new communication technologies. What is missing in the literature is a careful examination of ethnic media in the digital age. The original research, including case studies, in this book provides insight into (1) what new trends are emerging in ethnic media production and consumption; (2) how ethnic media are adapting to changing technologies in the media landscape of our times; and (3) what enduring roles ethnic media perform in local communities and in an increasingly globalized world. The ethnic media that contributors discuss in this book are produced for and distributed across a variety of platforms, ranging from broadcasting and print to online platforms. Additionally, these media serve numerous immigrant, ethnic, and indigenous communities who live in and trace their origins back to a variety of regions of the world, including Africa, Asia, Europe, North America, and Oceania.

"A useful overview of ethnic media. Recommended for scholars and students of International and Global Media and for those interested in migration and internationalization." (Cinzia Padovani, Southern Illinois University Carbondale, USA)

Introduction: Ethnic Media in the Digital Age: New Research from Across the Globe (Sherry S. Yu and Matthew D. Matsaganis)

Part I. Changes: Emerging Ethnic Media Forms and Their Roles in the Digital Era
1. The Disrupting Tempest: A Case Study of Young Minority Female Media Producers (Wajeeha Malik and Alison Novak)
2. Ethnic Digital Media as Agenda Setters and Agenda Marketers: The Case of WXC and the Jimmy Kimmel Live Controversy (Qun Wang and Vikki Katz)
3. Playing with Time: Linguistic Resurrection and Contemporary Jewishness on YidLife Crisis (Michele Byers)
4. From a Latino-Oriented Niche to the "Multicultural Mainstream": Univision, Fusion and Social Media Audiences (Vinicio Sinta, Lourdes M. Cueva Chacón, and Viviana Rojas)
5. Digitalized Ethnic Press and the Representations of British Muslims in the Wake of the 7/7 Bombings: A Case Study of "Passion Islam" (Irfan Raja and Abdul B. Shaikh)
6. Ethnic Media and Accessibility: The Case of Online English-Language Ethnic Media in the U.S. (Sherry S. Yu)

Sherry S. Yu is an assistant professor in the Department of Arts, Culture and Media and the Faculty of Information at the University of Toronto, and a member of IAMCR.