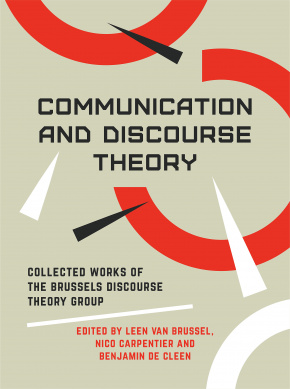 Chapter 1: Crisis, Austerity, and Opposition in Mainstream Media Discourses in Greece, by Yiannis Mylonas
Chapter 2: (Re)Articulating Feminism: A Discourse Analysis of Sweden’s Feminist Initiative Election Campaign, by Kirill Filimonov and Jakob Svensson
Chapter 3: The Stage as an Arena of Politics: The Struggle between the Vlaams Blok/Belang and the Flemish City Theaters, by Benjamin De Cleen

Section 2: The Politics of Everyday Life

Chapter 4: A Discourse-Theoretical Approach to Death and Dying, by Leen Van Brussel
Chapter 5: Putting Your Relationship to the Test: Constructions of Fidelity, Seduction, and Participation in Temptation Island, by Nico Carpentier

Chapter 6: The Postmodern Challenge to Journalism: Strategies for Constructing a Trustworthy Identity, by Jo Bogaerts and Nico Carpentier
Chapter 7: The Particularity of Objectivity: A Poststructuralist and Psychoanalytical Reading of the Gap between Objectivity-as-a-Value and Objectivity-as-a-Practice in the 2003 Iraqi War Coverage, by Nico Carpentier and Marit Trioen

Chapter 8: The Articulation of “Audience” in Chinese Communication Research, by Guiquan Xu
Chapter 9: Articulating the Visitor in Public Knowledge Institutions, by Krista Lepik and Nico Carpentier
Chapter 10: To be a Common Hero: The Uneasy Balance between the Ordinary and Ordinariness in the Subject Position of Mediated Ordinary People in the Talk Show Jan Publiek, by Nico Carpentier and Wim Hannot

Chapter 11: Online Barter and Counter-Hegemonic Resistance, by Giulia Airaghi
Chapter 12: Activist Fantasies on ICT-Related Social Change in Istanbul, by Itır Akdogikan
Chapter 13: Contesting the Populist Claim on “The People” through Popular Culture: The 0110 Concerts versus the Vlaams Belang, by Benjamin De Cleen and Nico CarpentierCleen and Nico Carpentier

Nico Carpentier is associate professor in media and communication studies at the Department of Media Studies of Charles University in Prague, and Chair of IAMCR's Participatory Communication Research Section.