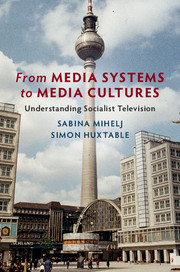 By Sabina Mihelj and Simon Huxtable

In From Media Systems to Media Cultures: Understanding Socialist Television, Sabina Mihelj and Simon Huxtable delve into the fascinating world of television under communism, using it to test a new framework for comparative media analysis. To understand the societal consequences of mass communication, the authors argue that we need to move beyond the analysis of media systems, and instead focus on the role of the media in shaping cultural ideals and narratives, everyday practices and routines.

Drawing on a wealth of original data derived from archival sources, programme and schedule analysis, and oral history interviews, the authors show how communist authorities managed to harness the power of television to shape new habits and rituals, yet failed to inspire a deeper belief in communist ideals. This book and their analysis contains important implications for the understanding of mass communication in non-democratic settings, and provides tools for the analysis of media cultures globally.

‘From Media Systems to Media Cultures is a wonderful contribution to comparative media studies. It theorizes the complex and little-known world of state socialist television, and provides a compelling example of what it means to compare media cultures, and how this is related to the study of media systems.' - Daniel C. Hallin - University of California, San Diego

‘This ambitious volume performs exemplary comparative research on socialist television, shifting the emphasis from media systems to media cultures. This book makes a major contribution to the study of mass communication under authoritarian rule and is a significant intervention in global communication and media research.' - Aniko Imre - author of TV Socialism

‘This book fruitfully uses the state socialist TV landscape to reset our notions of media culture across diverse national contexts. Refracting the idea of comparative media through the gaze of entangled modernities, it complicates existing understandings of Cold War TV and recasts it in terms more consonant with culture. A creative and generative study that promises to have decisive impact on how we think about comparative media research.' - Barbie Zelizer - Raymond Williams Professor of Communication, University of Pennsylvania

‘In this pioneering, deeply researched and remarkably wide-ranging study, Mihelj and Huxtable have brought the insights of media studies to bear on the history of socialist television. They are sensitive to cultural particularities but always alive to comparisons and connections, both between individual socialist countries and between socialist 'East' and liberal democratic 'West'. Historians and theorists of Western media will have much to learn from this book as they reflect on their own fields.' - Stephen Lovell - King's College London

Sabina Mihelj is a member of IAMCR.