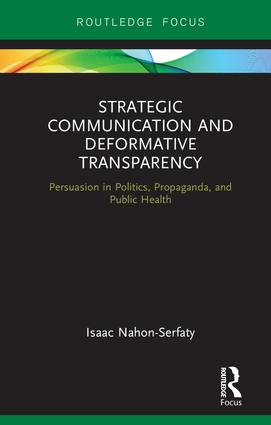 This book examines deformative transparency and its different manifestations in political communication, propaganda and public health. The objective is to present the theoretical foundations of deformative transparency, as grotesque and esperpentic transparency, and illustrate the validity of such approach to understand the strategic and ethical implications of the proactive disclosure of the "shocking", "ugly" or "outside the norm". Four areas are discussed: political communication with particular focus on populist politicians as the deceased Venezuelan president Hugo Chávez, the campaign and presidency of Donald Trump, and the tenure in office of the mayor of Toronto, Rob Ford; propaganda strategies of Islamist terrorist organizations such as the Islamic State’s escalation of the visually horrific; and public health campaigns that use "disturbing images" to promote public awareness and eventually influence behavioural change. This study on the transparently grotesque is part of a research program about the economy of emotions in public communication.

1. Grotesque transparency: theoretical and methodological foundations
2. Alternate reflexivity: the politics of excesses
3. Sacralization and profanation in public communication
4. Public health, fragmentation and the legitimacy of the grotesque
5. Strategy, transparency, aesthetics and the ethics of the realistically grotesque
Conclusion: change and atavism in grotesque transparency

Isaac Nahon-Serfaty is Associate Professor of the Department of Communication, University of Ottawa, Ontario, Canada and a member of IAMCR.