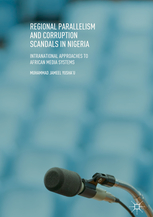 Regional Parallelism and Corruption Scandals in Nigeria is a ground-breaking book that offers fresh perspectives on the character and role of the African media in covering corruption scandals. It explores whether reports regarding corruption stem from the efforts of journalists who employ investigative journalism, or if it is a mere coincidence promoted by the activities of anti-corruption agencies. To that end, the book develops a media systems theory for Africa based on the coverage of corruption scandals in the Nigerian press. This new theoretical paradigm, defined as regional parallelism, argues that African countries are nations within nations, and that therefore any comparative study of the media system should recognize this understanding.

The book combines both interviews with journalists as well as qualitative content analysis of newspapers to determine the patterns and issues that influence the reporting of corruption. It also looks at corruption within the media itself, taking into account factors such as regionalism and ethnicity within the practice of journalism.

“This book tackles pertinent issues such as corruption, conflict and democracy in selected African countries to illustrate that neither the continent as a whole, nor the individual countries within it should be treated as monoliths. Rooted in a historical understanding of African media, the book demonstrates the importance of viewing African media systems as diverse and contested.” (Herman Wasserman, Professor of Media Studies, University of Cape Town, South Africa)

“This book offers a timely and much needed critical analysis of Media Systems in Africa and significantly broadens the scope and depth of work on Media Systems theory. Through a nuanced and systematic analysis of the reporting of corruption scandals in Nigeria, Muhammad Jameel Yusha’u provides students and scholars with a conceptually rigorous and empirically grounded account of how the mediation of corruption scandals in Nigeria signal forms of regional parallelism and partisanship across religious, political and geographical divides. Yusha’u also helpfully applies his media systems analysis to other contexts, with chapters on South Africa and Kenya, thereby significantly enhancing both the geographical reach of the book and its contribution to African Media Studies and Political Communication more broadly.” (John Steel, Department of Journalism Studies, University of Sheffield, UK)

“A good read, Regional Parallelism and Corruption Scandals in Nigeria details the historical and contemporary roles of media in sub-Saharan Africa. It fills a huge void in the literature of media studies in the continent.” (Abdullahi Tasi’u Abubakar, School of Arts and Social Sciences, City University, London, UK)

Muhammad Jameel Yusha'u is Founder and President of the online educational technology platform Uni Focus Academy, which provides free courses to students in higher education, and a member of IAMCR.