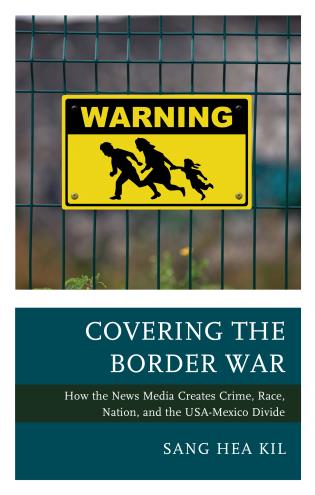 Covering the Border War: How the News Media Create Crime, Race, Nation, and the USA-Mexico Divide examines the notion of the body politic in border newspaper coverage of the USA-Mexico divide and how the nation and immigration are racially imagined in crime news discourse, where whiteness is associated with order and brownness is associated with disorder in a variety of imaginative, nativist ways. By applying critical discourse analysis methodology to the Los Angeles Times, Arizona Republic, Albuquerque Journal, and Houston Chronicle during a peak epoch of border militarization policies (1993–2006), brownness emerges through a news crime frame that reflexively shows the values and meanings of whiteness and the nation. At the body scale, border crossings threaten the whiteness of the national body through suggestions of rape and disfigurement. Border news discourse feminizes the nation with nurturing resources and services under threat of immigrant “rape” as well as expresses racial anxiety about a “changing face” of the nation. Border news coverage constructs immigrants as home intruders at the house scale, both human and animal. Whiteness at this scale reflexively signifies a law-abiding, rightful owner of property protecting against criminal trespassing. Brown immigrants are also seen as wild animals, which constructs whiteness burdened with the task of animal management. Whiteness at the regional scale suggests a masculinized, militarized battleground or a settled region threatened by a brown, cataclysmic flood. Finally, the nation scale complements the body scale but in a more contemporary and scientific way. Whiteness reflects a body politic fighting the disease of cancer/immigration in two ways: with an imagined militaristic, immune system and with hi-tech, aggressive operations. This “diseased body politic” communicates whiteness and nativism about the border through discursive border symptoms and border operations that represent the intersection of immunology discourse, the racial construction of the body politic, and anxiety about postmodern economic transformation and its impact on national borders.