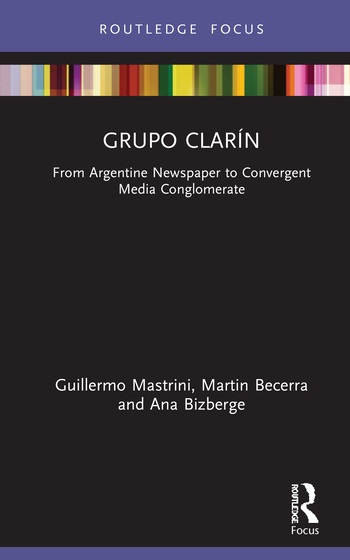 From its emergence as a modest newspaper to becoming the largest communication group in Argentina, and one of the main communications groups in Latin America, this book examines the media conglomerate Grupo Clarín.

Guillermo Mastrini, Martín Becerra and Ana Bizberge analyze the group’s corporate structure and the aspects that have contributed to its expansion throughout its history, mapping its stages of growth to the regulatory policies, cultural politics, economics and political history of Argentina over the last few decades. This book offers a compelling analysis of one of the key players in the Latin American communication and information market, highlighting how the conglomerate has continued to grow under various different governments - by achieving legal reforms and influencing policies - and continues to have great capacity to influence the policy and regulation of the system, the market structure and cultural consumption in the region.

This book is ideal for students, scholars and researchers of global media, political economy, and media and communication, especially those with an interest in Latin America.

Guillermo Mastrini is a Professor at Universidad Nacional de Quilmes and Universidad de Buenos Aires, and a member of IAMCR.

Martín Becerra is a Professor at Universidad Nacional de Quilmes and Universidad de Buenos Aires, and a member of IAMCR.