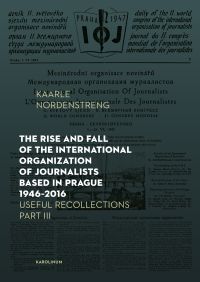 This is a unique account of the history of what was once the world’s largest association in the media field – its gradual expansion from a post-World War II fraternity of professional journalists in some 20 countries to a vast organization in the late 1980s, covering 300,000 journalists in 120 countries, and running several schools of journalism, a publishing house, a conference service and various commercial companies in Czechoslovakia and Hungary. However, after the outbreak of the Cold War in the late 1940s, most national unions of journalists in the western countries remained outside the IOJ, while it extensively covered journalists in the socialist East and developing South. Hence, the book provides an exciting chapter on the history of the Cold War and the fall of the socialist regimes in Europe, which also led to the demise of the IOJ.

The author served as President of the IOJ for 14 years during its heyday and in the crucial year 1990, when the Soviet-led communist order in central-eastern Europe was replaced by new western oriented regimes, also among journalists. In addition to a chronological account of the organization, the book includes testimonies by several key actors inside and outside the IOJ and comprehensive appendices containing so far unpublished documents.

Preface
Part One – History of the IOJ

Part Two – Recollections of the IOJ

Appendices – Documentation on the IOJ (36 documents)
Bibliography
Index of names

Kaarle Nordenstreng is Professor Emeritus of Journalism and Mass Communication at Tampere University, Finland, and member of the IAMCR History Commission. More at https://sites.tuni.fi/kaarle/