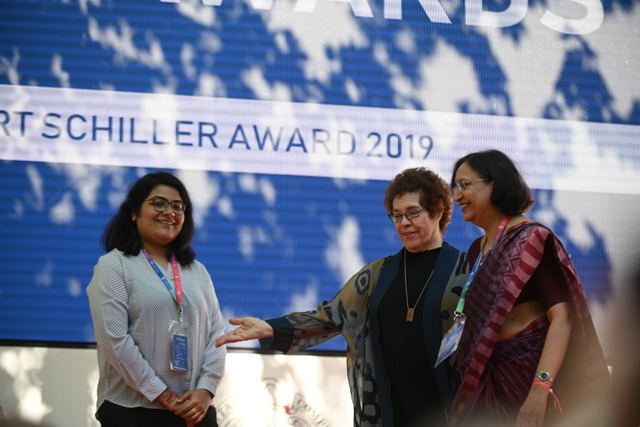 IAMCR is pleased to announce that the 2019 award in memory of Herbert I. Schiller was presented to Pooja Ichplani, Archna Kumar, Rupa Upadhyay and Jessica Mayberry, for their joint paper "Communication Processes, Community Mobilization and Normative Shifts: Learnings from Video Volunteers’ India Unheard Program"

The paper is based on the research work conducted in India for a Master’s dissertation at Lady Irwin College, University of Delhi. The study focuses on Video Volunteers (VV), a human rights organization working to empower community voices by building capacities of marginalized individuals in citizen’s journalism. The study uses a qualitative, participatory M&E method – Dart & Davies’ Most Significant Change Technique – to gain holistic insights into the communication processes at community level. It outlines its activities in bringing about changes in the lives of the local media producers, called community correspondents (CC). Using Gladwell’s tipping point theory and application of Bicchieri’s normative theories, this article evaluates VV as a tool for normative change and empowerment. It also examines the potential of participatory video in center staging socio developmental issues of relevance to the people at-large, and throws light on the normative shifts, both at a micro- and macro-level.

The paper impressed committee members for its socially relevant and inspiring collaborative research. Its activist spirit informed a well organized study of participatory communication and collective mobilization in the context of community media in India. It shows how theory and praxis can combine to guide participatory media strategies aimed at giving a voice to marginalized communities so that they might better influence public policy. The paper makes an especially good contribution to the field of ICT for development. The authors focused on an Indian film collective, Video Volunteers, which was established as a not-for-profit, human rights organization with the goal to "create an alternate media landscape where people from marginalized communities are trained in producing high quality media content." Using interviews and other qualitative methods, the authors analyzed how Video Volunteers helped to empower "people at grass roots to express themselves freely and depict their concerns based on their own experiences and understandings” and, through the participatory process of media-making, "building solidarity and challenging existing inequities and power structures.”

The award was formally presented at the 2019 IAMCR conference in Madrid, Spain.

The members of the 2019 Schiller Award Selection Committee are:

Pooja Ichplani is a Gold Medalist (2017) in M.Sc. Development Communication and Extension, which she pursued from Lady Irwin College, University of Delhi, New Delhi, India. She has previously worked with Johns Hopkins University - Center for Communication Programs in India as a Young Scholar. Her areas of interest include community media, public health, social norms, gender and human rights.

Dr. Rupa Upadhyay has a doctorate G.B. Pant University of Agriculture & Technology, Pantnagar, India. She specializes in Olericulture. She has vast experience as an Undergraduate and Postgraduate teacher in renowned Lady Irwin College, University of Delhi, India and guided many postgraduate students. She has been working in the areas of Sustainable Agriculture, Livelihood Systems, Post Harvest Management of Horticultural Produce etc. For the benefit of the students she has written numerous manual and books. She has made significant contribution to the academic world, with several research and review articles in national and international journals to her credit.

Jessica Mayberry is a Fellow of Ashoka, TED and Echoing Green. She holds a degree in Modern History and Modern Languages from Oxford University. She has also been recognized as an Architect of the Future by the Waldzell Institute of Austria, and as an “Outstanding Young Person” by the Junior Chamber International Osaka. Her passion for social entrepreneurship and activism began when she trained marginalized women in video production as a William J. Clinton Fellow of the American India Foundation.