Global Handbooks in Media and Communication 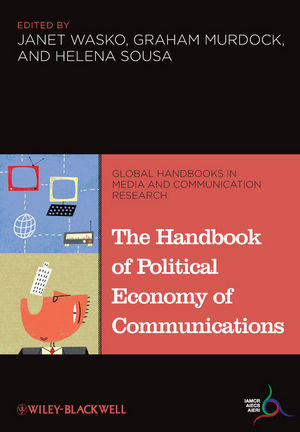 The Global Handbooks in Media and Communication Research series is published by IAMCR and Wiley Blackwell. This series emerged from a recognition that we need to foster the publications of key reference texts that build from and are relevant to global contexts.

With a membership from around 100 countries, IAMCR is uniquely positioned to lead this series, contributing to communication and media scholarship that reflects the global diversity of its participants. Its members promote global inclusiveness and excellence within the best traditions of critical research in the field.

These handbooks are global in the best sense: in scope, authorship and perspective.  Intended to move away from reproducing dominant western and northern assumptions, the series is designed to lead a more comprehensive global conversation.

The volumes are designed to highlight the best critical scholarship in key areas of communication and media research. Chapters engage contemporary theories, in historical context, include empirical work drawn across different countries and regions, and advance incisive arguments in clear and compelling presentations.

Proposal Guidelines are available from the Series Editors.

The Handbook of Development Communication and Social Change
Edited by Karin Gwinn Wilkins, Thomas Tufte, Rafael Obregon, 2014
This valuable resource offers a wealth of practical and conceptual guidance to all those engaged in struggles for social justice around the world. It explains in accessible language and painstaking detail how to deploy and to understand the tools of media and communication in advancing the goals of social, cultural, and political change.
Read more
Global Handbooks in Media and Communication

The Handbook of Media Audiences
Edited by Virginia Nightingale, 2011
This handbook offers a comprehensive overview of the complexity and diversity of audience studies in the advent of digital media.
“Admirably comprehensive and with original contributions from leading scholars in the field, this is a volume that everyone should have on their shelf.”- Graham Murdock, Loughborough University
Read more
Global Handbooks in Media and Communication
The Handbook of Political Economy of Communications

Edited by Robin Mansell and Marc Raboy, 2011
Co-published by IAMCR and Wiley-Blackwell, this book offers insights into the boundaries of this field of study, assesses why it is important, who is affected, and with what political, economic, social and cultural consequences. It provides the most up to date and comprehensive collection of essays from top scholars in the...
Read more
Global Handbooks in Media and Communication