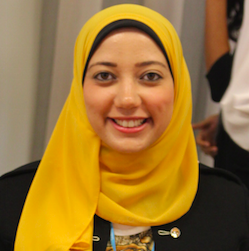 IAMCR is pleased to announce that the 2020 Prize in Memory of Dallas W. Smythe will be awarded to Rana Arafat for her paper "Examining Online Diaspora Journalists’ Productions and Networks: A Case Study of Syrian Post-Conflict Advocacy Journalism".

The award will be formally presented during the IAMCR 2020 opening ceremony on 12 July. The paper will be presented at Online Conference Papers, in a panel on Journalism Practices, Strategies and Challenges within the programme of the Journalism, Research & Education Section.

Rana K. Arafat is a PhD student at the Institute of Media and Journalism in University of Lugano (USI), Switzerland. She holds Bachelor and Master's degrees in International Journalism. She worked as a journalism/media lecturer for five years at the College of Language and Communication in the Arab Academy of Science and Technology. She wrote for a big number of local and international newspapers and magazines including Daily News Egypt, Egypt Independent, the German Orange magazine, the Swiss Saint-Gallen magazine, and the European Journalism Observatory (EJO), led by Reuters institute in Oxford University. Her research interests cover a wide range of topics including activist/advocacy journalism, digital media and migration, diaspora journalism, conflict reporting, and journalism innovations.