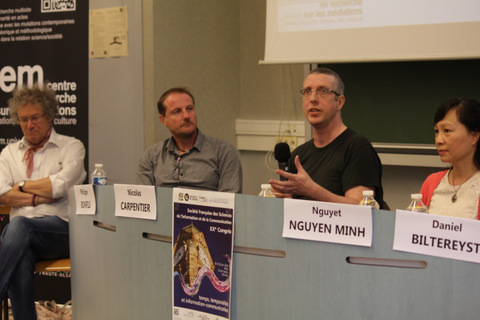 After two preparatory meetings in 2015, in Montreal and Paris, the Société française des sciences de l'information et de la communication (SFSIC) and IAMCR agreed to organize a series of events to encourage the building of international bridges between researchers across different communities.

To focus our collaborative efforts, a project on the Histories of Communication Studies was developed, with the objective to stimulate original historical analyses of the concepts, paradigms, methods, institutions, educational programmes, features and figures which have structured communication studies, and which are firmly located in the many contexts which have produced them.

A first discussion panel (following a call for proposals) was held at the 20th congress of SFSIC, which took place in Metz, France, on 8-10 June 2016, organised in collaboration with the Centre de Recherche sur les Mediations (CREM), at the Université de Lorraine. The Histories of Communication Studies project was also introduced to the conference attendants, during a plenary session (see pictures). On behalf of IAMCR, Daniel Biltereyst and Nico Carpentier attended the congress.

The second discussion panel will take place during the IAMCR conference in Leicester, UK.