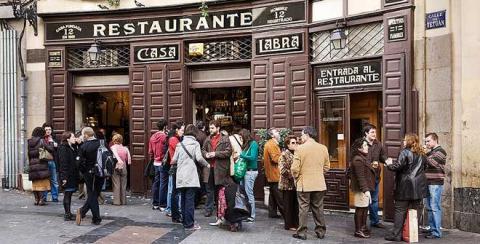 Spain is outstanding for its cuisine, and during the summer our capital city is no exception. Here are some dishes to be enjoyed in Madrid during this time:

Nobody who visits Spain should leave without having enjoyed this simple and delicious potato and onion omelette.

This cold cream soup is probably the most popular choice in Spanish cuisine during the hot months. There are a lot of variations, but the staple ingredients are tomatoes, onions and green peppers; and it is usually served with a sprinkling of finely cut cured ham and hard-boiled egg. Delicious, healthy and perfect to beat the heat.

Often confused with gazpacho, it is also a cold vegetable cream, the main difference with gazpacho being the addition of bread crumbs, which, along with the tomatoes, make it a thicker cream. Another great option to stay cool during the hot days (and evenings) of summer.

These breaded and fried croquettes, with different ingredients ranging from ham to chicken or vegetables, are typical all year round; another typical dish to try.

The most typical and popular cold meat both in Spain and abroad. Another showpiece of our cuisine.

The variety of different Spanish cheeses is as great as the number of regions they come from. Probably the best known are the Manchego cheeses in their many varieties. But there are also great cheeses from Asturias, the Basque country, the region of Galicia and many others.

Famous the world over, paella in any of its varieties (valenciana, mixta, veggie, etc.) is a must-have before you leave the capital.