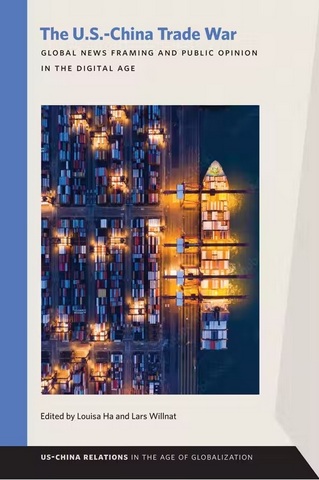 Drawing on data from three national surveys, three content analyses, computational topic modeling, and rhetorical analysis, The U.S.–China Trade War sheds light on the twenty-first century’s most high-profile contest over global trade to date. Through diverse empirical studies, the contributors examine the effects of news framing and agenda-setting during the trade war in the Chinese and U.S. news media. Looking at the coverage of Chinese investment in the United States, the use of peace and war journalism frames, and the way media have portrayed the trade war to domestic audiences, the studies explore how media coverage of the trade war has affected public opinion in both countries, as well as how social media has interacted with traditional media in creating news. The authors also analyze the roles of traditional news media and social media in international relations and offer insights into the interactions between professional journalism and user-generated content—interactions that increasingly affect the creation and impact of global news. At a time when social media are being blamed for spreading misinformation and rumors, this book illustrates how professional and user-generated media can reduce international conflicts, foster mutual understanding, and transcend nationalism and ethnocentrism.

Louisa Ha is Professor of Research Excellence in the School of Media and Communication, the founder and chair of the Emerging Media Research Cluster at Bowling Green State University, and member of IAMCR.

Lars Willnat is the John Ben Snow Endowed Research Chair in the Newhouse School of Public Communications at Syracuse University, and member of IAMCR.