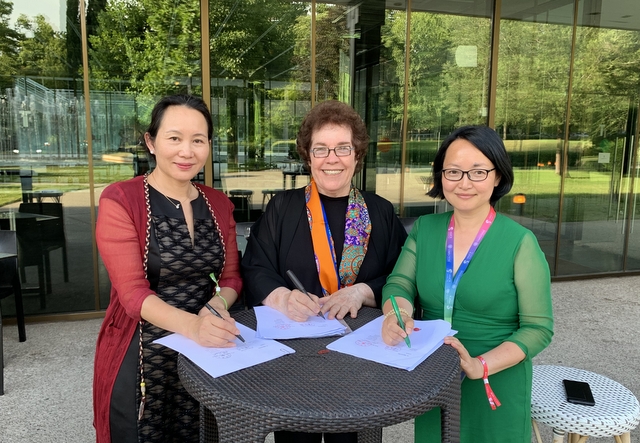 The International Association for Media and Communication Research (IAMCR) will be taking its annual conference to Beijing, China for the first time in the association’s 63 year history.

IAMCR 2020 will explore the conference theme, “Reimagining the Digital Future: Building inclusiveness, respect and reciprocity”, from 12-16 July, 2020 at the Beijing campus of Tsinghua University. The conference is being organised in cooperation with the School of Journalism and Communication of Tsinghua University, the School of Film and TV Arts at Xi’an Jiaotong-Liverpool University in Suzhou, and the Chinese Association for History of Journalism and Mass Communication (CAHJC).

The decision to hold the conference was confirmed with the signing of an agreement during the IAMCR 2019 conference in Madrid and was formally announced at the closing ceremony on 11 July.

IAMCR president, Janet Wasko, said: 'We are pleased to be working with our colleagues at Tsinghua and Xi’an Jiaotong-Liverpool universities in planning the 2020 IAMCR conference — the first IAMCR conference in Asia since 2014, when we met in Hyderabad."

The Dean of the School of Journalism and Communication at Tsinghua University, LIU Binjie, was enthusiastic about the event: “I believe that the scholars' discussions will contribute to the global fo  rmation of the theories and practices in the field of journalism and communication, and promote the progress and development of human culture!"

CHEN Changfeng, president of CAHJC, and Adam McIlwaine, dean of the School of Film and Television Arts at Xi’an Jiaotong-Liverpool University agreed that they were looking forward to enhancing exchanges with the international academic community

The School of Film and TV Arts at Xi’an Jiaotong-Liverpool University in Suzhou has a long tradiition in Communication Studies. A joint venture founded by the University of Liverpool and Xi’an Jiaotong university, it is an an international institution with a diverse staff and student body where courses are taught in English.