Regional Conclave 2021 in Kolkata: "The conclave illuminated the minds of many" 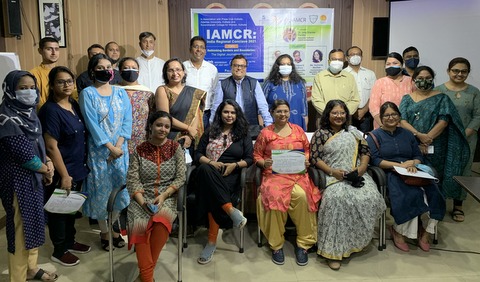 Watch a video summary of this event

The IAMCR-India Regional Conclave on ‘Rethinking Borders and Boundaries: The Digital Journalism Context’ organised as part of the IAMCR "No Travel" Event was attended by over 25 academics from different colleges and universities in Kolkata and its surroundings.

The offline conclave was held at the Press Club, Kolkata — the oldest Press Club in South Asia. It was organised by IAMCR-India in association with the Press Club Kolkata, Adamas University, and Surendra Nath College for Women.

The conclave started with the opening remarks by Dr. Uma Shankar Pandey, IAMCR Ambassador of India. In his opening remarks, he stressed on the theme of “Rethinking Borders and Boundaries: The Digital Journalism Context” and also articulated the major thrust areas of this conclave.

Arijit Ghosh, one of the event's participants said:

The IAMCR regional conclave illuminated the minds of many by bringing forth the opportunity for discussion among the illuminati from the sphere of media and communication.

Mr. Snehasis Sur, the President of the Press Club and an eminent journalist shed light on the Digital News Report 2021 and E&Y FICCI report on the media and entertainment sector. Presenting interesting facts pertaining to highlight the growth of digital media, he reiterated, “Covid 19 has negatively impacted the media industry. However, if one goes across the reports and data, it can we witnessed that the trajectory of the growth of Digital and New Media is rising.”

Ms. Suchorita Bardhan, the Communication Specialist at UNICEF India, has worked extensively in activities which require communication for development to bring a social change in the society. She at length discussed the topic of Risk Communication and Reporting. She articulated, “The social media has an important role in spreading information and awareness.  Social media has created content producers out of the audience. Every person today is empowered to contribute to content making, all because of the social media. Sometimes, there are such stories which are often ignored by the mainstream media. But later when such stories are shared on social media and they become viral, the popular media organisations pick them up and run it. Such is the power, which social media has.”

This is the third major conference organised by Dr. Uma Shankar Pandey, as part of the Ambassador initiative, the first one — a regional conference in India held in January 2016  — ‘The International Conference on News Literacy. The second one was the IAMCR-India Webinar series on Media and Communication Research, held from 3 to 7 August 2020.

The conclave was streamed live on IAMCR-India Facebook page.
See photos of this event here