News from the Regions 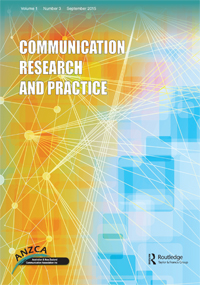 The Australian and New Zealand Communication Association has a new journal, Communication Research and Practice, published by Taylor and Francis and edited by Prof. Terry Flew of the Queensland University of Technology. It was launched at ICA and at the Association's 2015 conference in Queenstown, New Zealand, and promises to be a high quality platform where regional and international scholarship can meet. The journal replaces the Australian Journal of Communication, which was sent to all members until it closed in 2013. In the same year, the other journal that we provide to members, Media International Australia, has signed up with Sage Publications, allowing the journal to expand internationally. It also has a new editor, Dr Rowan Wilken of Swinburne University of Technology.

The Association has begun a series of workshops on particular themes, that bring together scholars in a number of Australian cities in between our annual meetings. In April 2015, the University of Sydney hosted an event on data analysis, ‘Digging the Data', coordinated by Dr Jonathon Hutchinson. In June, the gathering of the West Australian Communication, Culture and Media (WACCM) group – co-hosted with the Cultural Studies Association of Australasia – focused on the trajectories of the disciplines that make up the field. WACCM meets again in November 2015 at Edith Cowan University. I mention these events to colleagues not just to celebrate them as energetic collaborations, but also to highlight the value of focused events to build networks between universities in a city or region. These are proving of great value to junior scholars, meeting ANZCA's goals of fostering the development of all scholars. We see that as a particularly valuable role to play, as job and funding opportunities tighten in the region and the workforce is further casualised.

AMIC gears up for 2016 International Conference

As the AMIC Secretariat is setting up its new Manila office, it is also gearing up for the convening of the 2016 International Conference in its new host country. AMIC Secretariat and the Board of Management have started brainstorming on how best to conduct AMIC Manila 2016. The Conference is tentatively scheduled on July 28-30, 2016. Five communication schools and at least one multi-purpose mall are being considered as host venue for the International Conference.

Like in previous conferences, AMIC Manila 2016 will revisit Asia's contributions to the evolution of communication systems in the world. A possible theme is Rethinking Communication and Media in a Resurgent Asia. But unlike previous conferences, the Manila Conference will feature not just plenary and parallel sessions, but also poster presentations and business sessions where AMIC members and invited communication-related companies will launch books, programs, products, and services. It will also provide opportunities for business matching and partnership sessions between schools, professional communication organizations, and signing of appropriate memoranda between and among the participating groups.

Conference planning activities are simultaneously being conducted with the setting up of the AMIC Secretariat Office at the Philippine Women's University (PWU), in conjunction with the Asian Institute of Journalism and Communication (AIJC). The two communication schools have formed a consortium to host AMIC in Manila.  The AMIC Manila Office will be launched with an inaugural forum in early 2016.

Just as scheduled on our agenda, ALAIC held its 2015 Summer School "Communication Research in Latin America" at the Federal University of Brasilia on late March. Postgraduate students from this region attended these courses, which aim to become a permanent space of update and dialogue, rotating its host country, in order to acknowledge and analyze particular national realities. Academics from Latin America, Canada and Europe held conferences and classes in this second edition of ALAIC's Summer School. This school was evaluated last May 14th at the Summer School Communication Research in Latin America's Evaluation Seminar held at the Federal University of Santa Catarina, Brazil. This activity can be looked up at: http://mejor2015.sites.ufsc.br/

For the first time ever, ALAIC organized and held two regional seminars in the same year. The first was held in the Caribbean region and the second one in South America. The 7th ALAIC Research Seminar "Communication, Culture and Challenges of Contemporaneity" (Comunicação, Cultura e Desafíos da Contemporaneidade) was attended by more than 200 participants and took place in the Metropolitan University (UMET) at San Juan, Puerto Rico, May 25th-27th. The 8th ALAIC Research Seminar (Southern Region) "Policies, actors and communication practices: research crossroads" ("Políticas, actores y prácticas de la comunicación: encrucijadas de la investigación"), organized jointly with the Information Sciences School of the National University of Córdoba, Argentina, was held in that city August 27th-28th. This meeting brought together 450 scholars, who discussed the seminar subject in plenaries and working groups. Further details on the meeting and presentations held are available on request at: alaic2015 [at] eci.unc.edu.ar

It was during this meeting last August that ALAIC presented its book: Latin America's contribution to the field of Communication Research. History, theoretical, epistemological approaches and research trends (La contribución de América Latina al campo de la Comunicación. Historia, enfoques teóricos, epistemológicos y tendencias de la investigación), edited by Cesar Bolaño, Delia Crovi Druetta and Gustavo Cimadevilla. This work was edited in Argentina by Prometeo Editions and a number of ALAIC members refer part of the history of this field of knowledge through detailed accounts of crossings between communication and other disciplines.

It was also at Cordoba University, during our Southern Region's VIII Seminar, that ALAIC presented its Repository The threads of our history: a space for all (Los hilos de nuestra historia: un espacio de todos), which aims to contain works spread all over Latin America regarding the building of the field of communication. We consider that feeding this Repository will be a labor shared by all those scholars and professionals who have participated in seminars, meetings, forums and national and international conferences, where communication has been analyzed from perspectives that we deem compulsory to know and bring together in order to better articulate the building of the history of this field of knowledge, as well as our regional thoughts.

On last July, as part of the 2015 IAMCR Conference in Montreal, Canada, we organized the Panel ALAIC-IAMCR "Communication, Hegemony and Power: Latin American perspectives", which encouraged the discussion regarding Communication in Latin America, as well as the collection of experiences on the conference's subject. Among other conferences in which ALAIC representatives have attended to, we have to mention the Second International Conference of Popular Communication, Orbi (FOLKCOM); and the Ibercom Congress 2015, both meetings held in Sao Paulo, Brazil.

We also remind you that our published works can be found at the Journal of Latin American Communication Research, which has released two issues (Volume 5 No. 1, 2015 and Volume 4 No. 2), available at: http://alaic.net/journal/index.php/jlacr/issue/current; and our Latin American Journal of Communication Research (Revista Latinoamericana de Ciencias de la Comunicación) at: http://www.alaic.net/revistaalaic/index.php/alaic. Latest information is disseminated at: www.alaic.net or www.alaic.org; and http://alaic2014.blogspot.com