The Global Journalist: News People Around the World

Some of these studies have been modeled on the three major national surveys of U.S. journalists conducted in 1971, 1982-83, and 1992, and some have been presented at meetings of the International Association for Mass Communication Research. Many of these surveys have been widely scattered in various papers, dissertations, articles, and reports. This book pulls them together and provides a more general synthesis of their findings across national borders and differing cultures were possible. It takes a global perspective on the demographics, education, socialization, professionalization, and working conditions of journalists in these countries. 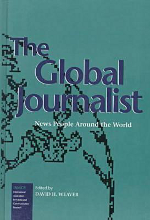