We should drink more beers together 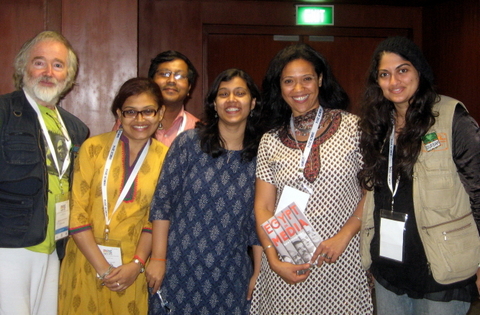 Geisa Fernandes, a recent PhD graduate from the University of São Paulo, received her first travel grant to attend the 2013 IAMCR in Dublin and a second one a year later to attend the conference in Hyderabad. Her paper, presented to the Comic Art Working Group, was titled: We should drink more beers together: How cartoonists could teach comics scholars a thing or two.

In this note, she tells us about her experience.

The IAMCR meeting this year was very special for me in many ways.

It was my second time as a travel grant recipient and, as the previous one, it was a significant aid. Without the grant, I could not have travelled to either Dublin or Hyderabad.

However, this year the experience was even more overwhelming because the chair of our Comic Art Working Group, Professor John A. Lent, was not able to get his visa to India in time and I was chosen to serve as co-chair of the group, which by the way, celebrated its 30th anniversary this year.

During these three decades a lot happened, but Professor Lent always managed to keep the working group alive and active. Being responsible for the group in Hyderabad was, for me, both a huge honour and big task that I assumed very seriously with the help of my colleagues. I would also like to thank them all for the amazing time and the inspiring discussions.

The interaction with colleagues at the conference, particularly (but not only) the ones from the Comic Art Working Group, was one of the most interesting experiences in my career, all thanks to the grant.

In my home country, many areas are now being subsidised by public funding agencies, but Human Sciences are in general still not seen as a priority. In my particular case, the situation is a little bit more difficult. A comic art researcher, even with a PhD title from the prestigious University of São Paulo (USP) is still, in many senses, a stranger in the nest.

I have learned that there are basically two ways out of this situation: one may give up on an academic career or carry on. I have chosen the second one, but publishing, attending conferences and other academic related activities have their own costs and it is sometimes hard to balance the passion for what we do with a realistic perspective concerning the money needed to keep this passion. In my case, the travel grant has been, in the past two years, an essential element to solve this equation.

Finally, I would like to like to express my gratitude to the colleagues responsible for the travel grant process, especially Nico Carpentier and Bruce Girard, who have always provided us all the information needed to complete the submission successfully. Thank you very much for your patience and assistance and long life to initiatives such as the IAMCR travel grant!