Taryn Mackay (South Africa), one of the nine young scholars to be awarded an IAMCR scholarship to attend IAMCR's 2011 conference in Istanbul tells us about her expectations and experiences, and how this event helped her appreciate her every day reality from a different perspective.

I define myself as a cultural activist. someone who believes that art, culture and media are the tools that will help us connect the dots that will mean that we are more capable of articulating meaningful responses to the problems that plague, not only our practical situation but also those that have creeped into the bloodstream of our psyche.

I live in a country more schizophrenic than most. a place that outwardly barters with history and memory to maintain a type of global political superiority, while at the same time reduces the true traces of memory into impenetrable capsules that are repeated so often, they have lost all meaning.

To further compound this reality, I live in a community, Soweto, that has all but been transformed into a monument or memorial for this packaged consumption of history. an area that is at the center of South Africa’s ostensibly booming trade of political tourism- a type of voyeurism where the historically insignificant and affluent are transformed through the colonial experience of gazing.

It's with this baggage that I stepped into the IAMCR conference, in the hope of finding a space where, through dinning at the table of ideas, sharing experiences and lived realities; new and innovative responses to shared problems could be birthed... 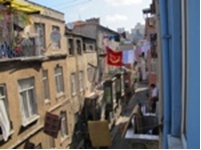 Instinctively I took an unorthodox approach to the conference. Finding the sterility of hotels unbearable, I found an apartment in Taksim, that as fortune would have it, was located just on the line of the gentrification efforts.

Istanbul stole the show. a first time traveler to the city, the vibrance of the place and its people is intoxicating. and the synergy between this experience and the theme of the conference - Cities, Connectivity and Creativity- was a powerhouse. While any other traveller would have to make their own sense of what they were seeing and experiencing, the conference provided me with a mediated lens that helped make the connections between the lived reality in Istanbul and that of a city more than 7.000 Km away, Johannesburg.

Istanbulscapes, the second plenary session of the conference, had a particularly powerful impact on me. the four speakers took elements of the city and explained the inner workings and trappings of the place to us, its guests. The session gave me insight into the plans for the city which, placed outside the realm of ordinary folk, were shaping their lives. I winced as what I heard about anti-poor, anti-memory gentrification processes and the cultivation of fear in the interest of bolstering a booming security industry, mirrored my experience at home. While I can imagine that it does come across as a tad naive, the conference made the concept of globalisation, practical and real for me. I had always understood, at a head level the pernicious effects of this ideology, but had never imagined the extent to which our local battles are so similar and that the way that power asserts itself is at once nuanced and homogenous.

I was part of the Mediated Communication, Public Opinion and Society Working Group. I found it was in these breakaway sessions that discussions could burrow deeper into our personal interests and focus areas. Again here, it was the work of Jacques Alkalai Wainberg from Brazil (2B17) that would have a profound impact on my conference experience. He’s paper, The Fight for the Control of the Traumatic Brazilian Memory helped me find the words to articulate my discomfort with what has virtually become the national discourse for reconciliation in South African, forgive and forget.  In his talk he asserted that “we are what we recall from the past” and that “utopia is the fire of the soul”. Both of these assertions I now use to underpin my work to assist in transforming and healing the broken communities in which I exist.

Having not been part of an international conference before, it was also of interest to me to see who is representing the voice and the interest of Africans (particularly South Africans) in these arenas. I attended the session Popular Media and Politics in Southern Africa (2C27) and was a little taken a back by the fact papers were either presented by those from the Global North or white South Africans. in a country where race continues to have an impact on our lived experience, our level of privilege an the ease or difficulty with which we can navigate the social space, I was a little uncomfortable with the fact that white South Africans are the only ones narrating the South African experience. My hope is that the conference being hosted in Africa next year will result in an increase in indigenous Africans involvement and a more representative voice.

Creating safe places to talk about and imagine a new world are crucial if we are to be able to find the tools that will construct this society. IAMCR Istanbul, was able to find the careful balance between work spaces and the freedom to meet, socialise and interact; the subtle interconnectedness that creates the impetus for us to know that a more loving and nurturing world is our birthright.

I am grateful to have been a part of something that operates outside the realm of simple equations of add and subtract, something that defines for itself the value of creating free spaces of thought and that holds a beacon out to the media, who too often shirk their responsibility in the interest of profit.