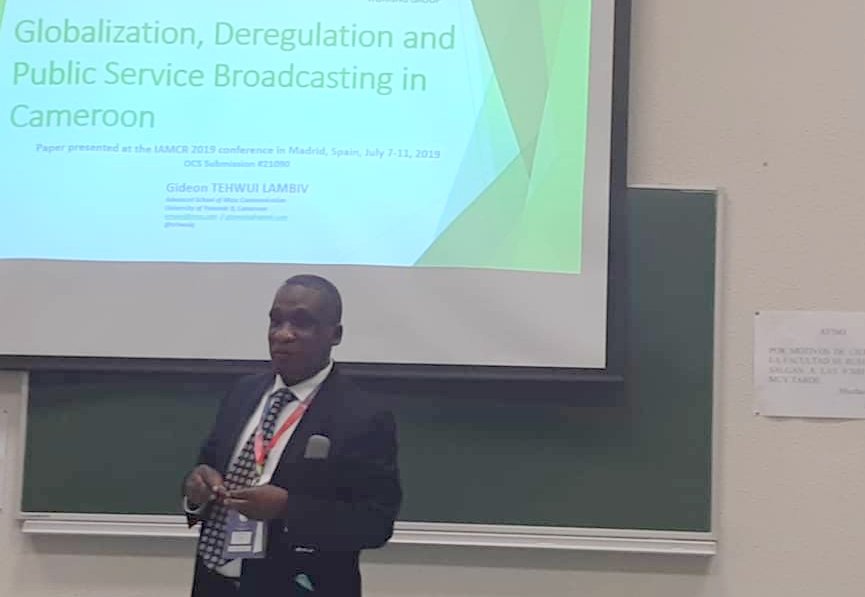 Gideon Tehwui Lambiv is a PhD student and Assistant Lecturer at the School of Mass Communication (ASMAC/ESSTIC) of the University of Yaounde II in Cameroon. He was awarded a travel grant to present his paper "Globalization, Deregulation and Public Service Broadcasting in Cameroon" to the Public Service Media Policies Working Group.

In this article, he reflects about his experience at IAMCR 2019:

The Madrid 2019 IAMCR Conference was the first I have attended since Professor Daya Thussu introduced the association to me and I became a member four years ago. I had submitted an abstract on “Globalization, Deregulation and Public Service Broadcasting in Cameroon”, for the 2018 conference in Oregon which was accepted. Unfortunately I could not attend because I was unable to fund my travel to the US. I re-submitted the abstract for the 2019 conference in Madrid which was accepted for presentation by the Public Service Media Policies Working Group. This time, I had a travel grant from the IAMCR which facilitated my participation.

I have been a practising journalist for over 20 years. In 2008, in an effort to give back to the school that trained me in journalism, I started sharing my professional experience by assisting in the training of future journalists at the University of Yaounde’s School of Mass Communication. This has rekindled my interest in research and teaching!

I am indeed deeply indebted to the IAMCR Travel Grant scheme which made it possible for me to participate at the 2019 Conference that has given me more impetus to pursue my ‘give back’ journey. The Madrid 2019 IAMCR Conference provided me with a golden opportunity to meet and interact with some of the authoritative people in the media and communication academia and finest minds in communication research and teaching. It was indeed a great moment to make new contacts and a wonderful reunion with some of my lecturers with whom I had separated from since 2004 after my studies for the MA at Westminster University in London!

If wishes were horses, then I will not want to miss any IAMCR conference!