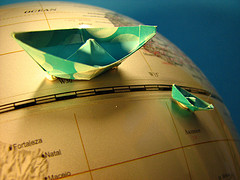 Victor Chagas of the Universidade Federal Fluminense in Brazil received a travel grant to present his paper, “Overlapping webs: an analytical model for use in Works on the political economy of printed media, in the Political Economy Section during IAMCR's 2014 conference in Hyderabad. Following the conference, Victor wrote us this letter.

With the IAMCR 2014 Travel Grant I was able not only to actually present my work in an important international conference but also to meet other scholars in my research field.

The Political Economy Section, as I realized at the conference, is reemerging with a completely new set of questions and concerns. Sitting near me, were professors and students from countries such as India, Bangladesh, Jamaica, Russia, United States, and many more. Besides my own section, I also met scholars from all over the world. I had, for instance, a unique chance to interview key scholars in my research area - interviews which will be published in Brazilian scientific journals. I also learned a lot from the panels and round tables, including the tribute to Professor Stuart Hall. I started an important debate with some Indian researchers which I expect to continue and extend in a serious South-to-South dialogue. All that without even mentioning the trip to India itself, which was certainly an experience of a lifetime.

As an early-stage scholar from a middle-income country such as Brazil, with difficulties to raise funds from research agencies for distant international conferences (it took me almost 30 hours to reach India!), the Travel Grant was fundamental to enable all this.