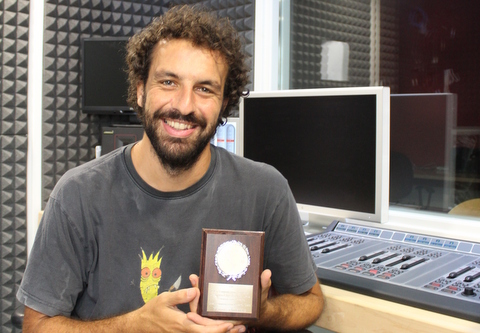 On 28 August at a small ceremony in Limassol, Cyprus, Yiannis Christidis was formally awarded the 2014 UCF/IAMCR Urban Communication Research Grant. Yiannis was awarded the prize for his research project project Soundscapes, Communities and Place Attachment in Urban Space: a study on the soundmarks of divided Nicosia and their effects, but was (because of prior commitments) unable to travel to Hyderabad to collect the prize. IAMCR's Treasurer, Nico Carpentier, on research leave in Cyprus, awarded the prize to Yiannis at the Cyprus University of Technology's Community Radio Station (CUT Radio). Yiannis again thanked the jury members for the honour and for the appreciation for his work, and said that he was looking forward to present the outcome of the research at IAMCR's next conference, in Montreal.

The award, consisting of a plaque and €1,500, is awarded annually by IAMCR and the Urban Communication Foundation to support communication and media research that advances our understanding of the growing complexity of the urban environment.