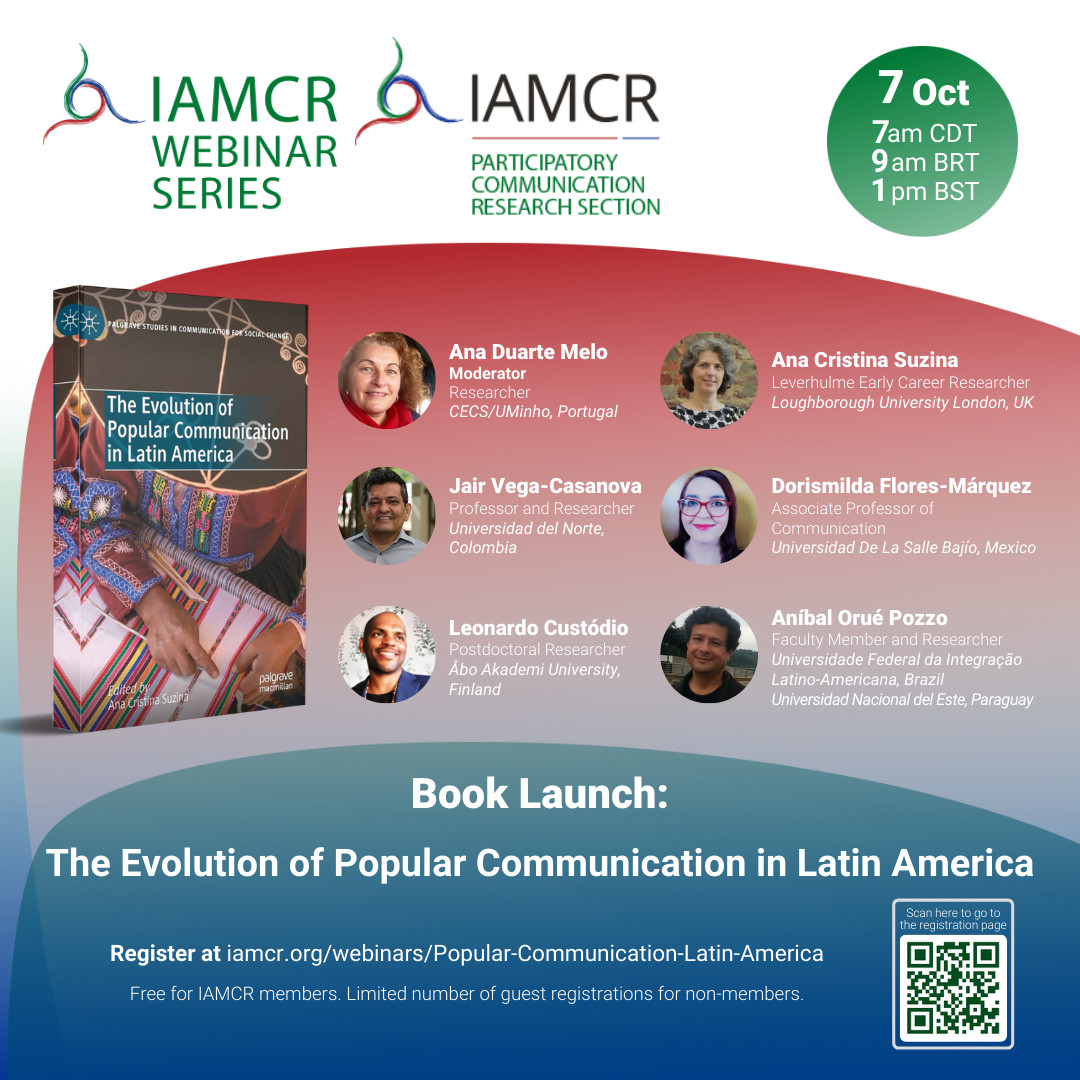 Webinar/Book launch: "The Evolution of Popular Communication in Latin America"

This webinar is over. See past webinars at IAMCR's Webinars Channel on Vimeo >>

As part of the IAMCR Webinar Series, the Participatory Communication Research Section is pleased to organise an event for scholars to present the book “The Evolution of Popular Communication in Latin America”. Edited by Ana Cristina Suzina and published by Palgrave in 2021, the book brings together twelve contributions that trace the empirical-conceptual evolution of Popular Communication, associating it mainly with the context of inequalities in Latin America and with the creative and collective appropriation of communication and knowledge technologies as a strategy of resistance and hope for marginalised social groups. In this way, while emphasizing the Latin American and even ancestral identity of this current of thought, this book positions it as an epistemology of the South capable of inspiring relevant reflections in an increasingly unequal and mediatised world. The content covers the roots of the studies and practices of Popular Communication in Latin America, its decolonial and critical aspects, focusing mainly in the argument of the book, that is fundamentally to present Popular Communication as an epistemology of the South, timely and fully capable of contributing to current debates in the field of media and communication.

The authors participating in the webinar will answer to questions from a moderator – there will not be formal presentations and the questions will be prepared and shared with the authors in advance. This first part will take up to 45 minutes. The second half of the webinar – maximum 45 minutes – will be open to questions from online participants. The objective is to work with a format of a conversation between authors, moderator and audience. The debate will be conducted only in English.

The webinar is sponsored by the Participatory Communication Research Section

Location: The meeting will take place on Zoom.

Who can participate: The webinar is free for all IAMCR members but space is limited.

Webinars are free for all IAMCR members but space is limited so pre-registration is required.

See past webinars at IAMCR's Webinars Channel on Vimeo >>

About the series: The IAMCR Webinar Series aims to open channels for engagement and participation in addition to the association's annual conference, keeping IAMCR members connected and engaged with regular dialogue about issues of importance to the international media and communication research community. Join us!