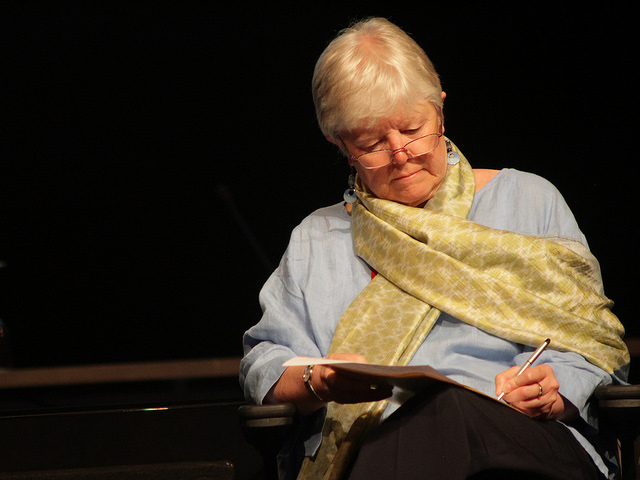 Professor Robin Mansell, a long-time member and supporter of IAMCR, was presented with a Distinguished Contribution Award in a ceremony during the opening session of IAMCR's 2017 conference in Cartagena, Colombia. Robin Mansell was IAMCR President from 2004 to 2008 but, as current president Janet Wasko said when announcing the award:

"That’s not why we are giving her this award.  She continues to contribute significantly in various ways to IAMCR. She is on the Finance Committee, the Scholarly Review Committee, and chairs the Clearinghouse for Public Statements – an incredibly important group for the association.

"In January 2016, in an article about Robin, Bill Melody called her "an IAMCR catalyst",  explaining that “IAMCR has grown immeasurably since she began helping its development.

"Her scholarly work and her praxis has contributed greatly to the association and we would like to thank her with this award."

Robin Mansell is Professor of New Media and the Internet in the Department of Media and Communication at the London School of Economics and Political Science. She has training in several social science disciplines including psychology, social psychology, politics and economics and is a strong advocate of interdisciplinary research when it builds on the strengths of disciplinary inquiry. Her research and teaching focus on the governance of digital media and communications, the social, economic and policy issues arising from innovations in digital technologies, the interactions between technical design and the structure of markets, and sources of regulatory effectiveness and failure.

In addition to teaching and research she has been involved in many aspects of School life including the Research Development Panel and the Council Nominations Committee. She served as interim Deputy Director and Provost 2015-16 and was academic Governor 2005-2010 and Head of the Department of Media and Communications 2006 - 2009.

Read a feature about Robin published on IAMCR's website in January 2016.

IAMCR is supported by the voluntary contributions of many people, including some 75 Section and Working Group chairs and deputies, 30 members of its International Council, a five-member Executive, many members of various committees and task forces, and more than 2,000 active members of the association.