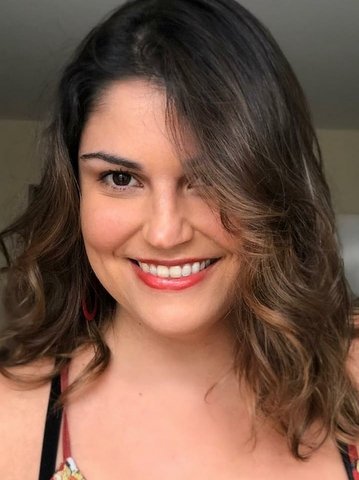 IAMCR has organised six webinars: Digital Divide and Digital Inclusion, BRICS Short Films Fest, Communication in Africa & the Caribbean, JRE Books Launch, Ecologies of Care, and Media Education: Movement or Field? In this article, Dr Andrea Medrado, IAMCR vice president and the coordinator of the IAMCR webinar series, is interviewed by Mazlum Kemal Dağdelen, and talks about the experience of organising the webinars and the importance of opening channels for engagement and participation in addition to the association’s annual conference.

How was the participation in the webinar series so far?

The participation level has met our expectations so far. The best-attended one was the first one, Digital Divide and Digital Inclusion. We had about 110 people registered. There was a limit in the room for attendees. In the end, 75 people attended. So, it was really well attended. I think this high level of participation was because that webinar was the first one, and there was the novelty factor. Also, the organisers, Dr Anna Gladkova and the Digital Divide Working Group, are very active, and they promoted the webinar a lot. It was a big success. The other ones had an average of 30 - 40 participants, which I think is very good. Because people have a lot of options of online events to attend at the moment. I, for example, register for a lot of events, but then something comes up. It is not the same commitment as when you are attending face-to-face events. About half of the people were IAMCR members, and the other half was IAMCR non-members. The way we managed it was that IAMCR members could log in through their member area on the website and register, and non-members sent an email to an address that I am managing.

It was nice that we had this flexibility because many people attended IAMCR events for the first time. Particularly for the first event, I noticed that some people would go on the guest list and then a week later, I got an email that they registered as IAMCR members. Maybe some of those people were IAMCR members but did not renew their membership, and then the webinar was a kind of motivation for them to renew their membership and register. I think some people just got to know IAMCR a bit more, the different sections of IAMCR, the various themes, the different Sections and Working Groups. Overall, I think it was excellent to have very high numbers of attendance. It is also good because the webinars allow people to engage, ask questions and talk to each other. It is what we can do in the current pandemic times; we can use these opportunities to meet virtually and talk to each other and connect.

The webinar series aims to open channels for engagement and participation for IAMCR members. Do you believe that this aim has been achieved so far?

We have been thinking about this for a while, even in pre-pandemic times, that the association needs to be active and promote these engagement opportunities outside of conference times so that people would not have to wait a whole year to meet with the IAMCR community. The annual event is excellent, and people look forward to it, particularly when we could go and travel physically to places. However, I think an association is also about keeping in touch and connecting at other times, not just the conference times. And a lot of sections have done a lot in this respect; they created communities on social media and found ways to stay in touch and carry on doing projects together throughout the whole year. So, we always wanted to motivate these sorts of things. Now, with the pandemic, in a way, the opportunity came up, and it became kind of part of the academic culture to do these webinars. It was also more convenient to organise webinars than physical seminars. So, that was the idea to take advantage of this opportunity, and carry on these conversations, keep them going throughout the year outside of conference times, and have an open channel so that sections could propose topics for the webinars.

There was also a suggestion from the Section and Working Groups coordinators, Asta Zelenkauskaite and Yolanda Paul, that it could also be an opportunity for celebration. Because many sections members have been very active in publications, publishing edited collections, with the work of members or former members who have been active in IAMCR. So, people could also approach us with an idea for a book launch, a celebration, something that can be used in the conference or something that can be used as a teaching resource. So, it was great, and some of them like them; for example, BRICS Short Films Fest was quite innovative. It was basically like a mini screening where we got together via Zoom and watched the short films, the people were really engaged. It was also really great that the filmmakers came to the session. People had a chance to engage directly in a conversation with the filmmakers; the filmmakers talked to each other. So, in short, I think that the aim of getting more connections in a more consistent way was achieved. The dynamics of associations are now changing with the pandemic, people love the annual face-to-face conferences, but when that becomes challenging, there are other ways to keep these conversations going, keep working together, and do things together.

Are you planning to share the recordings of the other webinars as an open knowledge project?

The recordings of "Digital Divide and Digital Inclusion", "Re-imagining Communication in Africa and the Caribbean", and “JRE Books Launch“ are now accessible online.  The other ones will also be shared on the IAMCR website. The idea is to make these videos available on the website. IAMCR has been very open; the image of IAMCR corresponds to the reality that we are an open and inclusive association.

How do you think the webinar series reflect IAMCR's values?

IAMCR is genuinely an international/global association, and the webinars reflect on this value of IAMCR.  These webinars were organised in collaboration with the Sections and Working Groups, which work literally worldwide. For example, if you look at the webinars, you can see that the first one was on the digital divide, focusing on the westernising media. The Digital Divide Working Group is solid in Russia but has members from all corners of the world; they also brought people on board who spoke about these issues, ethnic minorities, and the generation gap. Also, BRICS Short Films Fest focused on the global south, filmmakers, and artistic productions in Brazil, Russia, India, China and South Africa. It brought together the filmmakers to talk to people. Another webinar, Communication in Africa & the Caribbean, was about Africa and the Caribbean. There was also a massive book launch, including nine books. That webinar covered a wide range of issues. There were many different resources for various topics and issues, and much fresh work in the field of journalism, literally coming from all corners of the globe, was launched. Dr Sadia Jamil led that webinar; she gathered contributors from many different parts of the world. The webinar entitled "Ecologies of Care" was promoted by the Gender and Communication Section and focused on a very important globally relevant topic. And the last one, "Is Media Education a Movement or a Field?", was really interesting as well, people from various continents came together, from African countries, India, the US and Europe. So, there is really a global dialogue and this concerns looking at things from different angles, and most importantly, globally. In short, IAMCR really cares about diversity and various perspectives, and I think the webinar series genuinely reflect on this value.

What are the advantages and disadvantages of these webinars for scholars?

The most important advantage of webinars is that they are really convenient to organise and join them. Although it is never easy to organise an event, it is relatively simple to think of a topic and gather contributors and scholars. So, webinars allow people to get together from anywhere; people just need to connect to Zoom. However, at the same time, it is not the same kind of contact. It is not the same level. Also, sometimes there are too many events, and people have to plan. It is sometimes tiring to do calls or events the whole day. However, given the circumstances, we are trying to make the most of it.

How do you think the webinars will be in the post-pandemic world?

It cannot be more than speculation at the moment; however, I do think that they will stay. In the beginning, it was worrying to think about organising these events online, but now we know from experience that people do enjoy gathering and engaging online. I think some elements of it will remain, and these events will stay. I think a lot of the online education elements that we have been doing will stay. Also, online events are really beneficial for people who cannot easily fund their academic activities. Although online events are not the same as face-to-face meetings and there are access and connectivity issues and difficulties, they at least provide opportunities for virtual participation. Online events are also more eco-friendly. So, I do believe that they will remain in the post-pandemic world.

What are the plans for the upcoming period?

2021 is already fully booked. There were two events planned that could not take place in the first semester because we had a pretty intensive schedule. Those events will be carried over to the second semester with two different sections. We are also going to have the presidential PhD webinars with Nico Carpentier and the Emerging Scholars Network. We will have one webinar per month. Sections and Working Groups and the IAMCR members who want to connect to a section or working group to promote an event can have a look at the webpage of the IAMCR webinars to have information on how to apply for a webinar. There is a form with some basic information about the idea of the webinar. If members or sections and working groups are interested, they can go to the IAMCR Webinars webpage, and then we can look at the possibilities for 2022.

How is the webinar organising process?

It is very flexible. We have had very different webinars so far. We have had book launches, traditional webinars with a topic, and speakers discussing the topic; some were more like an online conference. We also had a webinar on media research and education, which was a conversation. It was a very nice format; basically, there were people from different perspectives, different parts of the world, more experienced and early career scholars. There was also the BRICS Short Films Fest, where we screened short films. So, we are open to new ideas. The only thing that needs to be kept in mind is the diversity issues. I personally would not like to see a webinar being proposed with just men speaking or with no ethnic diversity. Those things are essential. Of course, the proposed events must conform to IAMCR's caring and respectful values. We are also flexible in terms of the duration of the webinar. Some of them were two hours, but some of them were shorter. So, the organisers are free to think about what they want to do with the section. I am sure that they can reach a common ground. So, IAMCR members can collaborate with the Sections and Working Groups to organise the webinars.

If people are interested in organising a webinar for 2022, they should definitely do that. The webinars are small projects that enable us to work together. They are beneficial to get to know people and learn something new.