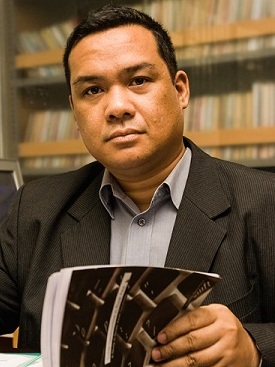 Professor Jude William Genilo is the Head of the Media Studies and Journalism Department, University of Liberal Arts Bangladesh (ULAB). Before joining ULAB, he headed the postgraduate programme of a prestigious communication school in Jakarta, Indonesia and served as a research fellow at the Kasetsart University Research and Development Institute (KURDI) in Bangkok, Thailand. Professor Genilo has received numerous awards, and he has authored and (co-)edited several books.

Professor Genilo has been an IAMCR Faculty Ambassador in Bangladesh since 2015, and he has organised many academic events. He has recently organised the four-day conference entitled “Dhaka Media Summit 2022 on the Future of Journalism”. The conference attracted audiences and welcomed participants at national, regional, and international levels. In this article, Professor Genilo talks about his experiences as an IAMCR ambassador, and shares his thoughts and experiences about the four-day conference that he organised.

Could you please share your experiences as an IAMCR Faculty Ambassador in Bangladesh?

IAMCR ambassadors are trying to promote IAMCR and contribute to the development of the association and the field within their regions; in my case, it is Bangladesh. The reason why I wanted to be an IAMCR ambassador is due to the objectives of the association. IAMCR intensely focuses on research; it provides a platform for researchers to share what they have done, develop critical thinking, or give training on research. Looking at the field of media and communication research in Bangladesh, I see that there is still much room for improvement. One reason behind this is that communication and media research is not very well-considered. There is little effort on how to make people become better researchers in media and communication. Therefore, my motivation to become an IAMCR ambassador was to help fill this gap in Bangladesh.

When I started planning workshops, I felt that the fundamental topics were the most needed ones. Therefore, I started with such topics as 'conceptualising research' and 'building a study framework'. I aimed to provide a platform to train early-stage scholars to develop strong concepts and frameworks to guide their research.

I also aim to promote IAMCR in Bangladesh. Although we have particular difficulties in promoting IAMCR and increasing the membership here, I know that as an ambassador, there are still many things I can do to promote IAMCR.

In one of the previous newsletters, I read IAMCR President Nico Carpentier's letter where he expresses that the ambassadors' network should be more highlighted, and there should be a greater presence of IAMCR in the countries with ambassadors. I was delighted to read it because it felt to me that there is a difference in thinking now in the leadership of IAMCR with regards to the ambassadors’ network. We now have a clearer idea of what IAMCR expects from the ambassadors and what we should expect from IAMCR. I also think that now we communicate with the association at a more sustained level. So, I think there is a greater commitment for IAMCR to have this ambassadors programme and have it more highlighted. I am also on the membership committee, where we have meetings and look at membership trends. I think the ambassadors' programme is an excellent way to increase and retain membership.

What are the advantages of being an IAMCR ambassador?

However, there are always obstacles as well. As an ambassador, it is your responsibility to expand membership. However, I am working in an environment with very few universities. Because there are a few universities, we have few faculties offering limited positions in media studies, journalism, and communication. Therefore, it is hard to find institutions or individuals to become members of IAMCR by paying the registration fee. Also, there are hardly any PhD candidates studying in Bangladesh. So, it is not easy to find PhD student members or PhD ambassadors. That is not the fault of the ambassadorship position, but this is the situation. So, I have to be more creative in thinking of ways to expand membership.

How do you see IAMCR's position in your country?

As I said earlier, there is a very limited number of universities in Bangladesh that offer Media Studies and Journalism. There are a few private universities as well as public ones, but the private universities are very young. In this context, the growth of IAMCR's presence is closely linked to the development of the field of media and journalism. If you look at the popularity of Media Studies and Journalism, unfortunately it is very unpopular. For example, there are around three million university students in Bangladesh, and less than one per cent of these are studying journalism. So, a tiny number of students go into our field. So, the universities think more about getting enough students to make their programmes survive. They look at other universities as competitors rather than allies in this context. This competition is also visible at the individual level. This competition affects the development of national and regional associations; however, IAMCR, as an international association, is in a more advantageous position because it is not much affected by the local dynamics. So, I believe IAMCR has more acceptance, and this will increase as people see the association's activities and see the early-stage scholars joining in. It will be beneficial for IAMCR to gain attraction if the local scholars see more international faces, such as the executive members of the association or the section and working group heads in the local events of IAMCR.

What are your reflections on the "Dhaka Media Summit 2022 on the Future of Journalism"?

The Dhaka Media Summit was held online from 10 to 13 March 2022.  The Summit featured ten associate partners from Indonesia, the Philippines, Thailand, Bangladesh, India and Nepal.  There were 58 research papers, five roundtable discussions, three master classes and one book discussion.  There was an IAMCR Ambassadors’ Session where five faculty ambassadors (from India, Kenya, Bangladesh, Portugal and Southern Africa) discussed about the future of journalism and its implications to media education.  It was one of the most memorable sessions of the conference.

What are my reflections?  First, belonging to a community has great benefits.  Being part of IAMCR and the IAMCR Ambassadors’ Programme made me feel assured that I was not alone.  IAMCR has my back, especially with Nico’s message of encouragement. Second, gathering scholars and researchers together is worth all the effort.  We learned so much from each other – dissecting journalism from various points of view, from different contexts. The energy and passion from our community of educators is infectious.  It makes us want to share more, network more and achieve more.  Third, realizing our capacity to learn as an organisation.  The Summit was a challenge for us at the department.  It was like putting pieces of a jigsaw puzzle together and trying to understand where each piece belongs.