More than the scholar I had been 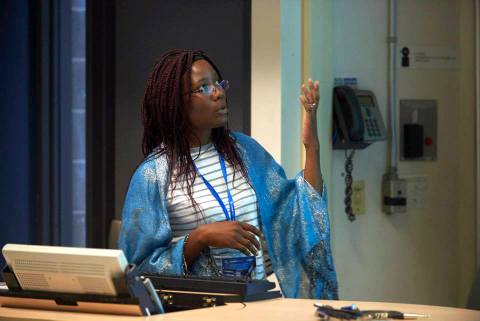 Rosemary Chikafa from the Department of English and Media Studies of the University of Zimbabwe received a travel grant to attend IAMCR 2015 in Montreal and present her work Hegemony or Resistance? An African(a) womanist reading of Sembene’s Moolaade to the Gender and Communication Section.

IAMCR 2015 at UQAM Montreal was my second after Durban 2012. I have since held IAMCR and its conferences in high esteem and I was not disappointed in 2015.

The IAMCR conferences remain invaluable to me and if there are no extenuating circumstances I will definitely attend every future IAMCR conference! I am pleased by the level of inclusivity that IAMCR offers; the South-North conversations prevailed for me not only through my presentation on African cinema and Africana womanist theory - Hegemony or Resistance? An African(a) womanist reading of Sembene’s Moolaade - but also through interactions with scholars from diverse academic environments and nationalities.

I applaud IAMCR for the travel grant that supports young researchers from low and middle income countries like me. As an emerging scholar, I was able to present my paper and be heard while at the same time gaining knowledge from constructive responses from other scholars. Meeting veteran scholars was a milestone and learning through them was the academic nurturing I had looked forward to.

I particularly enjoyed the plenary sessions among other presentations from the Gender and Communication Section and from other sections and working groups whose sessions I attended. I even made friends and formed academic networks that will make my academic pursuits richer.

I can confidently say I am more than the scholar I had been before I attended the 2015 IAMCR conference.

Merci IAMCR! I extend my gratitude to the IAMCR executive board, membership and donors towards the travel grant. You made it possible for me to attend this conference and to grow my academic career.