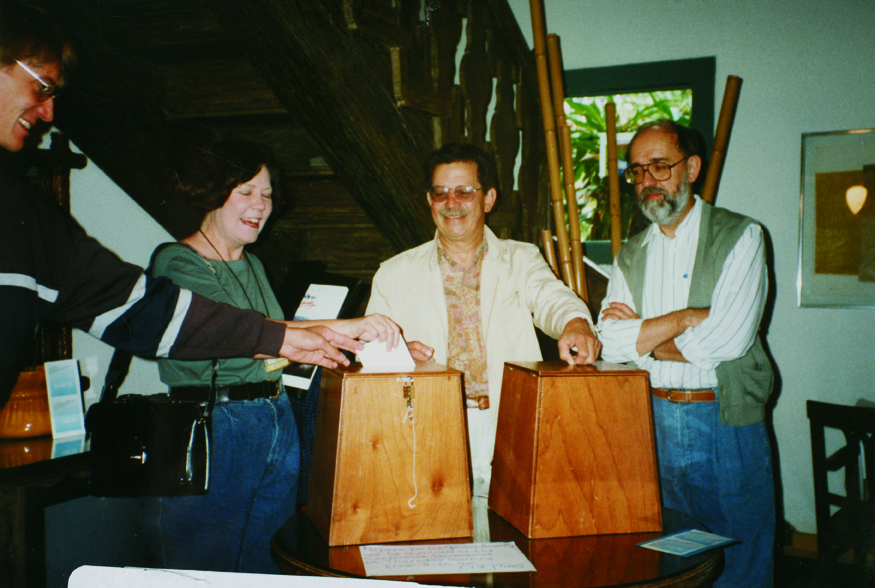 The rest of this short history does not deal with each major conference and each new President separately –their names appear in the lists and they are all in living memory. Instead, we note what we consider to be major challenges.

The list of conferences after 1990 is quite long, since it was agreed to hold “off-year” conferences at sites offering to host IAMCR between the regular biennial events. Starting with Istanbul in 1991, these conferences were intended to be smaller and to combine a meeting of the International Council with selected plenary sessions and a number of section meetings. In practice, they often were quite large and rich in their scholarly content – for example, Dublin in 1993 with Anthony Giddens as the keynote speaker, and Oaxaca in 1997 with a celebration of IAMCR’s 40th anniversary – so that there was little difference between these conferences and the regular biennial conferences. This shows that there was a demand for international platforms to be catered for and that there were enough enthusiastic hosts offering their services. On the other hand, the rising costs of international travel and improved Internet facilities for maintaining virtual contacts depressed to some extent the spontaneous interest in using IAMCR conferences for networking.

These developments created a challenge which led to proposals: to orient the Association towards virtual networking based on special interests typically mobilized by the Sections; to focus on regional meetings in the off-years; and to convene the main conferences less frequently than every second year – perhaps every fourth or fifth year as many other scientific world congresses have done. However, no consensus emerged, and the Association continued more or less as it had in earlier years. For rank and file members the core of activities were organized by the Sections, which grew in number despite attempts by a Section Review Committee to establish a logic that would avoid proliferation. Working groups were introduced as a sub-category of sections, gradually leading to a total of nearly 30 sections and working groups.

There continues to be a fundamental challenge, one that has followed IAMCR throughout its history, created by the tension between special disciplinary approaches to the field of media and communication and a more general interest in interdisciplinary methods of research. This poses a dilemma that cannot easily be resolved through organizational arrangements. This was recognized by Halloran and his predecessors and, in consequence, they were quite open to different initiatives and concerned with achieving a truly international representation. As Terrou used to say, no scientific progress was possible without extensive international collaboration.

Maintaining a worldwide Association –first in terms of its East-West balance and later its North-South balance– has been a challenge throughout the IAMCR history. There have also been periods of friction between different regional interests within the Western world –latin speaking vs. anglophone regions, Europe vs. North America– but these conflicts never overtook a common interest in a global platform. In fact, it can be argued that geopolitics has never become a negative factor but rather one which helped IAMCR not only to be internationally representative but, above all, to be intellectually stimulating. If there have been obstacles throughout our history – as in all human organizations – they are to be found in personalities and their “chemistry” rather than in scholarly traditions as such.

The changing nature of mass communication itself in the era on new media and digitalization has also presented many challenges. A manifestation of this was the decision to introduce a change of name: M for “mass” was changed to “media” in the middle of the 1990s.

In general, the Association has continuously faced new challenges both institutionally and substantively. The institutional challenge was met by expanded relationships with the UN system beyond Unesco, to include ECOSOC and WIPO, as well as NGOs, including the IFJ which after the Cold War embraced most of the former IOJ. Perhaps the most significant challenge was presented by the particularly topical debates in the field of human rights in platforms such as the Organization of Security of Co-operation in Europe (OSCE, Helsinki 1992), the World Conference of Human Rights (Vienna 1993) and the World Summit on the Information Society (WSIS, Geneva 2003 and Tunis 2005). A focus on communication rights meant a return to IAMCR’s roots when members had participated in the drafting of Article 19 of the Universal Declaration of Human Rights. IAMCR members offered a critical-analytical approach seeking to achieve a balance among those with vested interests attempting to employ human rights and fundamental freedoms as instruments to justify the globalization of commercial interests and those with an interest in championing fundamental freedoms as a principle guiding the media in the post-Cold War world period.

These challenges were created in part by Unesco’s orientation away from the so-called New World Information and Communication Order (NWICO), also abandoning the MacBride Commission’s approach, and towards a neo-liberal solution to communication problems. Personality changes in Unesco’s communication sector led to less emphasis on the scientific tradition represented by IAMCR’s activities. Instead, Unesco helped to create a new body around the so-called Unesco Chairs in Communication, called ORBICOM, which for many years received major subsidies from Unesco, while IAMCR received few or sometimes no assistance. Formally this new body was not directed against IAMCR, but in practice it contributed to a confusing and divisive state in the organization of the field of communication research internationally.

The global landscape of communication associations was further confused by the strengthening of regional research associations, although most of them have friendly and even formalized relationships with IAMCR. A particular challenge was posed by ICA which in the 1990s began a process aimed at internationalizing its membership beyond its mainly North American base. The landscape of media and communication scientists is populated by a diverse set of active regional and international associations. For IAMCR this poses the challenge to realize its unique historical mission in the interests of media and communication research worldwide in the context of a new global pluralism.

The history of IAMCR would seem to provide abundant material to meet this challenge!