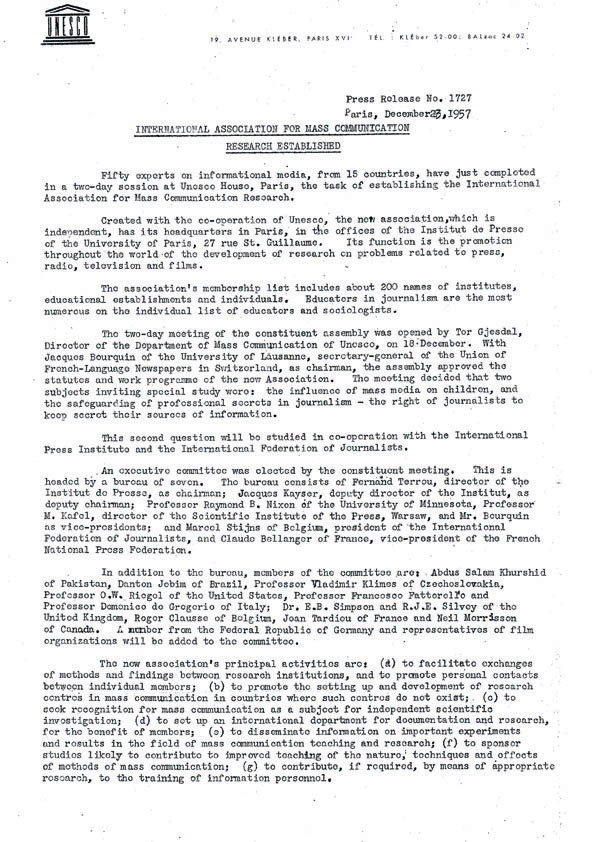 The “constitutive conference” (as it was called following the French terminology) was held at Unesco headquarters in Paris on 18-19 December 1957. Its minutes (“Compte rendu” in French) can be found in various archives but no pictures of this event have been retained even in Unesco’s photo library. However, we have the testimony of Hifzi Topuz – one of few surviving members of the founding conference. As reported by Topuz, the conference was opened by Tor Gjesdal, director of Unesco’s Department of Mass Communication, who might be called the godfather of IAMCR. A good summary of the founding conference is given in Unesco’s press release of 23 December 1957, in the two official languages (See original copies by clicking them).

Before closing the conference, its Chair, Bourquin, read a message from Dean English of the School of Journalism at the University of Missouri, inviting IAMCR to hold its next General Assembly in Columbia, Missouri.

The first General Assembly after the founding conference was held in Milan, Italy, rather than in the USA, in October 1959. However, IAMCR got there an American President, Raymond Nixon, while the founding President, Fernand Terrou, became Secretary General. Most of those elected as officers in Paris 1957 remained in office in Milan 1959, although some changed positions. Others elected to office in Milan were the Italian Francesco Fattorello and the German Martin Löffler.

A list of IAMCR officers elected at these and all subsequent General Assemblies is presented separately. This list excludes the position of Honorary President, granted to each of the past Presidents. A separate list gives the years and locations of all IAMCR conferences. The officers are given only for those conferences which had a General Assembly with regular elections (after 1972 normally every fourth year).

A short biography of IAMCR’s first President, then Secretary General and the Past and Honorary President, Fernand Terrou is provided here.

Raymond Nixon’s recollections of the early years can be read in a text he wrote for an IAMCR strategy publication compiled in 1980. This text speaks for itself and is reproduced here .

The Milan General Assembly in 1959 modified the organizational structure of IAMCR with a rotating Presidency and a permanent secretariat with the posts of Secretary General and Deputy Secretary General. Four permanent Sections were also established with the following Chairmen:

It is interesting to read President Terrou’s circular letter of 1958, because there he invites members to consider joining not only Sections for history and law but also Sections for audio-visual media and problems of media and children. Obviously there was not enough interest in audio-visual media and in the specific problem of media influence on children – the latter topic being part of the Section for psychological and sociological research.

President Nixon urged members to join the above-listed Sections in his circular letter of June 1960, reproduced here. Apart from the work of the Sections, IAMCR mobilized scholarly attention to topical issues through separate colloquia and thematic sessions at its biennial conferences.

The first major thematic undertaking was an international colloquium on the professional secrecy of journalists, held in Strasbourg in October 1958. This was followed by a study on the same topic commissioned by Unesco jointly from IAMCR and IPI in 1959. Another early topic to which IAMCR was invited to contribute by Unesco was the preparation of a selective bibliography on the influence of cinema on children. IAMCR also began to collect and publish general bibliographies on mass communication research – something that was foreseen as one of its main tasks at the founding conference (as Topuz reports in his recollections at the website). Although the harvest of these inventories was not as abundant as that gathered by Unesco’s Clearing House in 1956, the first IAMCR Bulletin served as a channel to share bibliographical data.

The foundation for IAMCR process continued in the second General Assembly in Vevey (Switzerland) in June 1961, and in the third in Vienna (Austria) in June 1964. President Nixon’s recollections cover this period from his perspective – including the transfer of the Secretariat from Paris to Amsterdam, with Maarten Rooy as Secretary General, Gazette as the official journal of the Association and the IAMCR Bulletin as its supplement. At this stage there was clear friction between the French and the Americans –Unesco siding with the Americans rather than with the French– but formally the Association was functioning normally. Nixon was succeeded in Vienna by Jacques Bourquin as President, leading to a new era in IAMCR history.