IAMCR history in a nutshell 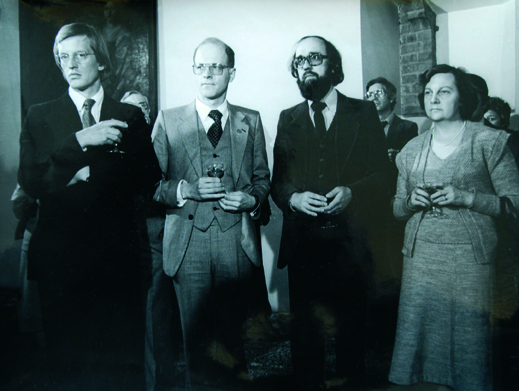 “Fifty experts on information media, from 15 countries, have just completed in a two-day session at Unesco House, Paris, the task of establishing the International Association for Mass Communication Research. Created with the co-operation of Unesco, the new association, which is independent, has its headquarters in Paris, in the offices of the Institut Français de Presse of the University of Paris, 27 rue St. Guillaume. Its function is the promotion throughout the world of the development of research on problems related to press, radio, television and films.The association’s membership list includes about 200 names of institutes, educational establishments and individuals. Educators in journalism are the most numerous on the individual list of educators and sociologists.”

The history of the IAMCR goes back to the first years of Unesco. Its Committee on Technical Needs in the Mass Media drafted in 1946 a constitution for an “International Institute of the Press and information, designed to promote the training of journalists and the study of press problems throughout the world”. The United Nations Conference on Freedom of Information, held in 1948 at Geneva, took note of the proposal and resolved that such an Institute could be conducive to the improvement of the quality of information, requesting “the Economic and Social Council to invite Governments and professional organizations, national and international, to examine together the possibility of implementing this proposal and, if it is found practicable, to co-operate in carrying it out”.

Actively involved in the 1948 UN conference were Fernand Terrou (who became the first president of the IAMCR), Jacques Kayser (a vice-president) and Jacques Bourquin (president from 1964 to 1972). They also played an important role in the drafting of Article 19 on freedom of information of the Universal Declaration on Human Rights.

Fernand Terrou, director of the Institut Français de Presse, was a leading advocate of the idea that an international association should be created “responsible for promoting throughout the world the development of the scientific study of problems relating to the important sources of information (press, cinema, radio, TV, etc)”. Terrou considered that no scientific progress was possible without extensive international exchange and collaboration. A parallel momentum was developing among academic centres of journalism education which also looked for international cooperation.

The 1952 Unesco General Conference authorized the Director General to proceed with the proposal and as a result two lines of action developed. One culminated in the establishment of training centres for journalists, the first being established in Strasbourg in 1956. The other development led to the establishment of a separate international organization for the promotion and exchange of scientific research. In 1953 a Unesco expert meeting began the compilation of list of projects in mass communication research around the world and in 1955 a report entitled Current Mass Communication Research was published. In November 1956 the Unesco General Conference authorized the Director General “to promote the coordination of activities of national research institutes in the field of mass communication in particular by encouraging the establishment of an international association of such institutes”. In December of that year an international conference took place at Strasbourg where a committee (Terrou with Mieczyslaw Kafel from Poland, Marcel Stijns from Belgium and David Manning White from the USA) was formed that prepared an assembly of what was to become the IAMCR.

This constituent assembly took place on December 18th and 19th 1957 at Unesco headquarters. Fernand Terrou of France was elected as the first president with Jacques Kaiser (France), Jacques Bourquin (Switzerland) and Raymond Nixon (USA) as vice-presidents, and the following as members of the permanent bureau: Claude Bellanger (France), Mieczyslav Kafel (Poland), and Marcel Stijns (Belgium). It is remarkable that at the high time of the East-West ideological confrontation, colleagues from both sides worked together in the establishment of this international research organisation; in addition to Kafel from Warsaw, Vladimir Klimes from Prague was an active participant. Also academics from developing countries were involved from the beginning, including Danton Jobim from Brazil. Hifzi Topuz attended the founding conference as a young Turkish journalist.

The main aim of the Association was to facilitate exchanges of methods and findings between research institutes and to promote personal contacts among individual members. A related objective was to seek recognition for mass communication as a subject for independent scientific investigation.

The first IAMCR General Assembly after the founding conference was held in October 1959 in Milan, where Raymond B. Nixon became president. The first leaders of the Association came mainly from journalism, journalism training and the print media and particularly from European countries. The enrolment of researchers from various disciplines and the widening of geographical representation were among the first priorities.

In 1958 the first section to be established was Historical Research, followed in 1959 by Legal and Political Research, Psychological and Sociological Research, Economic and Technical Research. Since then the IAMCR has regularly expanded the scope of its scientific domains and it counts today 15 sections and 16 working groups.

Since its foundation in 1957 the Association has organised every second year a scientific conference in connection with its statutory General Assembly. From 1970 on the conferences were successively held in Western Europe, Eastern Europe and the Third World. The following list includes the venues of the biennial conferences and the Presidents elected:

Since 1991 the Association has held also a scientific conference in the years between the biennial statutory Assemblies, first with smaller conferences focusing on a particular topic and later with full-size conferences including section and  working group sessions. These venues have been:

Over the six decades the aims and scope of the Association remained focused on the creation of a global forum where researchers and others involved in media and communication can meet and exchange information about their work. The Association wants to stimulate interest in media and communication research, to disseminate information about research and to create a broad constituency of researchers, practitioners and policymakers.

Throughout its history the Association has adopted public statements on such issues as the protection of journalists, the right to communicate, the freedom of research, the support for international communication policies in the service of democratic development, and the need to contribute to the improvement of communication facilities in the Third World. The concern about public presence of communication research and its role in public life has been a leading motive throughout the years. This became very concrete in the contributions of the IAMCR made to the United Nations World Summit on the Information Society (WSIS) in 2003 (Geneva) and in 2005 (Tunis).

For a more comprehensive academic account of IAMCR history, see Overview over of IAMCR history by Cees Hamelink and Kaarle Nordenstreng and Basics of IAMCR History - third edition, September 2022