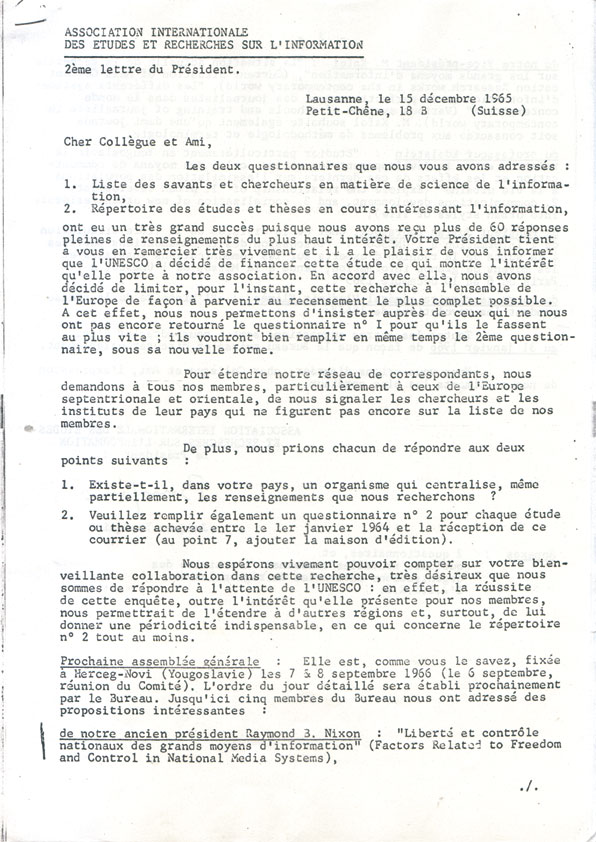 After Vienna the Secretariat was transferred from Amsterdam to President Bourquin’s office in Lausanne (Switzerland) from where he began to issue presidential letters –during his presidency of eight years 26 letters as mimeographed copies in English and French were issued reporting the organization’s news.

In this new Lausanne-based IAMCR, Gazette had only a nominal relation to IAMCR and its supplement Bulletin gradually disappeared due to lack of funding. However, Rooy was appointed within the IAMCR organization as an officer in charge of publications, while Terrou was listed as director of research. In reality, the clearing house function of IAMCR was limited to occasional lists of studies and publications by the members distributed with the presidential letters. Yet some thematic studies were carried out under Unesco contracts, the latest in this period being a comparison of the statutes of radio and television companies.

The main activity of IAMCR at this stage was the biennial conferences and other symposia; these were fairly well attended and served as important platforms for academic and also political exchanges. Through these live occasions the membership grew slowly but surely and kept its balance, especially between Eastern and Western Europe. Bourquin's report of the eight years of his Presidency is reproduced here.

A milestone conference was held in Herceg Novi (Yugoslavia at the time), a resort steeped in history on the Adriatic Sea, in September 1966. There, over 70 participants from 17 countries of Europe, Asia and the USA discussed among others the topic of mass media and national development. The development theme was introduced by Gerhard Maletzke from Germany, while Lakshman Rao from India was present as Unesco representative. This was the first time that the Finns attended an IAMCR conference and became active members –after Bourquin’s invitation to the research office of the Finnish Broadcasting Company (headed by Nordenstreng). Many Americans, including Alex Edelstein and Herbert Schiller, as well as Walery Pisarek from Poland and Yassen Zassoursky from USSR also joined the Association at this time. George Gerbner of the USA was also there but he had become an active member before 1966.

Additional Sections were set up in this General Assembly for terminology and methodology, for professional training, as well as for marketing and advertising. The latter Section was led by the American Leo Bogart who proposed in a letter to the Herceg Novi General Assembly the consideration of a merger with the World Association for Public Opinion Research (WAPOR). The Assembly invited Bogart to seek close co-operation –eventually a merger– between his Section and WAPOR. A similar merger potential was foreseen between the history Section and the International Council of Historical Sciences. It seems that no follow-up on these ideas took place.

In 1968 IAMCR held its General Assembly in Pamplona (Spain under Franco’s regime). There Zassoursky was elected Vice President –the first Russian in the leadership, although his predecessor Dean of the Faculty of Journalism at Moscow State University, Evgeniy Khudyakov, was involved in the preparatory process (as shown in the picture of the founding fathers). Irena Tetelowska of Poland became head of a new Section on bibliography in 1968, and this director of the Press Research Centre in Cracow was the first woman to hold a leading position in IAMCR. As mentioned in Bourquin’s report, she was killed in a plane crash on her way to an executive committee meeting in 1969. Another Section was established for research on mass media international understanding after a big international symposium on this topic held in Ljubljana jointly with the Yugoslav IAMCR members on 3-6 September 1968 – to celebrate the 20th anniversary of the Universal Declaration of Human Rights. Ironically, this was just after the so-called Czechoslovak events. 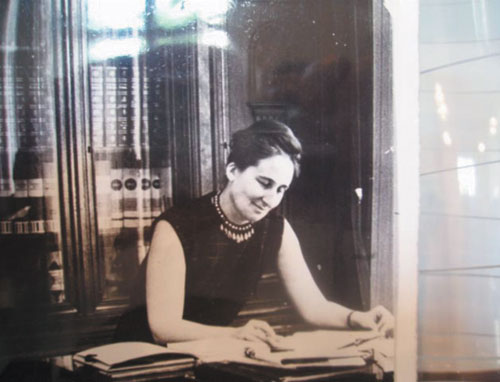 Cracow 1966: Irena Tetelowska, head of Bibliography Section in her office during the 10th anniversary of the Press Research Centre

The General Assembly in 1970 took place in Constance (Konstanz, West Germany) – after Moscow had been considered as a venue in connection with the world conference of historians. Here IAMCR adopted an extensive recommendation to the UN and its member states on various aspects of mass communication, notably freedom of information, the cultural integrity of nations and the use of satellites. Those active in drafting the recommendation included Bogdan Osolnik of Yugoslavia and Dallas Smythe of Canada. A separate resolution was adopted in support of journalists on dangerous missions and another in support of the efforts to set up a United Nations University, hoping that “the science of Mass Communication” would be accorded the recognition appropriate to its importance. This conference, incidentally, was the first one attended by James Halloran, and he was immediately elected as Vice President. Also Emil Dusiska of East Germany’s main School of Journalism at the Karl-Marx University in Leipzig attended the Constance conference.

At this time – from the late 1960s to the early 1970s – significant developments took place in the context of IAMCR. Firstly, mass communication research grew everywhere along with the expansion of the media themselves, especially television. New university programmes were established and national committees were appointed to highlight the field, leading to new institutions such as the Centre for Mass Communication Research at the University of Leicester (headed by Halloran). Secondly, the scientific and political orientation of communication research was diversified by the entry of critical “anti-positivist” scholars in the field – among them many who were active in IAMCR, notably Smythe from Canada and Schiller from the USA, and younger scholars such as Robin Cheesman, Nicholas Garnham, Armand Mattelart from Western Europe. Thirdly, Unesco raised mass communication research to a higher place on its agenda since 1968 – not by chance but as a consequence of the significance of developments at the national level.

The Unesco initiative is a story in itself –its explicit policy orientation bringing it close to the critical generation of scholars and its global resonance connecting it to the offensive of the Non-Aligned Movement of the developing world (one of their leading members being Yugoslavia). In these circumstances the General Conference of Unesco adopted in November 1968 a new strategy for promoting communication research and policy and authorized the Director-General, “in cooperation with appropriate international and national organizations, governmental and non-governmental, to undertake a long-term programme of research on technological progress in means of communication and to promote study on the role and effects of mass communication in modern society”.

One of the first activities taken up by the Department of Mass Communication, with Pierre Navaux as its director, to materialize the new line of work was to commission from Halloran (as director of the Leicester Centre) a working paper on mass media and society and to convene a meeting of experts on the topic in Montreal in June 1969. Halloran was consulted as to whom to invite and many in his list were active in IAMCR (including Bourquin, Edelstein, Maletzke, Nordenstreng and Smythe).

The Montreal meeting and its background document by Halloran were summarized in Unesco’s publication Mass Media in Society: The Need of Research (Reports and Papers on Mass Communication No. 59/1970, in English, French and Spanish). This event and the publication stands as a milestone in the history of mass communication research. They were followed by Unesco’s international panel of consultants on communication research, which included Halloran, Nordenstreng, Pisarek, Smythe and others from the IAMCR. The panel was first convened in April 1971 to prepare Proposals for an International Programme of Communication Research –another landmark document (known by its code COM/MD/20). (For more detailed history of the panel and its proposals, see Nordenstreng’s chapter in Mass Communication Research: On Problems and Policies. In Honor of James D. Halloran, edited by C. Hamelink and O. Linne, Norwood, NJ: Ablex, 1994.)