I remember the founding conference 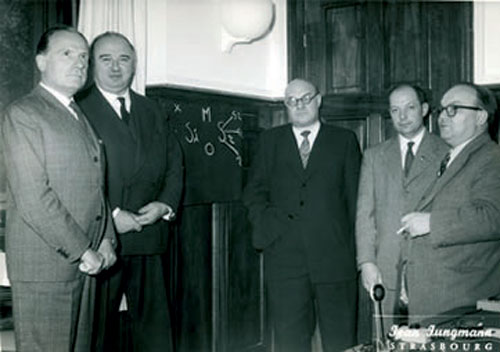 In 1957, I was president of the Union of Journalists in Istanbul and editor in chief of the Turkish daily paper, Aksam. The Turkish National Commission for UNESCO asked me to take part in the first course of the International Centre for Higher Education in Journalism which had just been created in Strasbourg.

This course, which lasted two months, gave me the opportunity to get to know the director of the centre, professor Jacques Léauté, the director of the French Institute of the Press, Fernand Terrou and the deputy director of the Institute, Jacques Kayser, many researchers in the field of communications and distinguished journalists such as Henri Cassirer, Roger Clausse, Pierre Denoyer, Robert Desmond, Francesco Fattorello, Jacques Godecho, Robert Hennart, Emil Dovifat, Vladimir Klimes, Ralph Nafziger, Martin Rooij, Robert Salmon, Raymond Manevy, Rolf Meyer, Pierre Schaeffer, Bernard Voyenne and many others...

Following this meeting, I was invited by the Assistant Director-General of UNESCO to participate in the constituent conference of the International Association for Mass Communication Research on the 18th and 19th of December 1957, which took place in the Secretariat of UNESCO at avenue Kléber in Paris.

There were 14 countries, represented by 57 participants, and 5 international organisations. The conference was opened by a speech given by Tor Gjesdal, the director of the Department of Information at UNESCO. Having emphasised the role of communication in the modern world he continued by focusing on the importance of coordinating research in the field of communications and concluded his speech with the following words: “At UNESCO, we are in agreement with the organizers of this meeting in asserting that the time has come to try to establish tighter links and greater cooperation between the research institutes and individual researchers throughout the world on subjects relating to means of communication."

Fernand Terrou stressed in his address the importance of the independence required by the Association, emphasizing the following points: “Here is, I believe, a particularly characteristic example of the true mission of UNESCO: To promote efforts for international cooperation in the intellectual field, facilitate their expansion, clearly show their benefit, and then stepping aside to start again elsewhere.”

The agenda for the conference included the development of the Association’s statutes. Numerous participants such as Terrou, Kayser, Bellanger, Kafel, Fattorello, Blin, Denoyer, Stijns and Clausse gave their opinions about the plan prepared by the interim committee. After the discussions, the statutes of the Association were passed unanimously. The council and the executive committee were formed as follows:

Jacques Kayser, researcher, distinguished journalist and deputy director of the Institut Français de Presse, addressed the conference with very concrete issues. He emphasized that first of all a list had to be compiled of international research institutes within the information field, followed by the development of a bibliography of subjects in the communications field and finally to state clearly and define methods as well as a terminology to be used. In conclusion, he proposed two foremost topics for research: the influence of media on children and the professional confidentiality of journalists.

These topics have since become the subject of research in UNESCO’s programmes and have for many years provided support, which has been financially modest but morally significant, in the development of activities in the IAMCR. UNESCO has therefore been able to benefit from the contributions by the members of the IAMCR in the development and realisation of the UNESCO’s research programmes in the field of communication.

Having spent 25 years as the official leading the IAMCR project at UNESCO, I am honoured to be involved with its 50th anniversary as one of its founding members. As I am today one of the rare survivors of the constituent conference, I would like to bring to mind all those colleagues who participated in the creation of the IAMCR and who have since passed away. People such as Tor Gjesdal, Fernand Terrou, Jacques Kayser, Jacques Bourquin, Raymond Nixon, Claude Bellanger, Raymond Manevy, Mieczyslaw Kafel, Vladimir Klimes, Francesco Fattorello, Pierre Navaux, Jacques Godechot, Martin Loeffler, Jean-Louis Hebarre, Giuliano Gaeta have firmly supported the IAMCR and contributed to its success.