Conference report: “Participatory communication and the struggle over human rights” 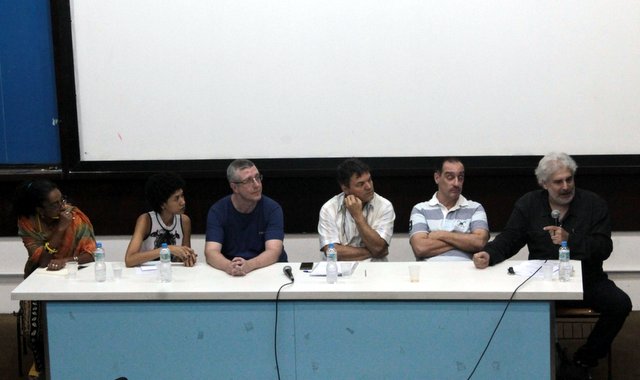 The PCR Section co-organised the event “Participatory communication and the struggle over human rights”, in collaboration with a range of Brazilian institutions: LCD, the Laboratório de Comunicação Dialógica at UERJ; NUTES, the Institute of Educational Technology for Health at UFRJ; EMERGE, the Research and Production Centre in Communication and Emergence at UFF; and PPGMC, the Postgraduate Program on Media and Everyday Life at UFF.

The seminar took place on 1 and 2 July 2019, at the Rio de Janeiro State University (UERJ). Its objective was to bring together researchers and activists in order to discuss the interconnections between participatory communication and human rights.

The seminar had two morning plenary panels: The first plenary panel was on “Participatory communication and the fight for human rights”. It was chaired by Marcelo Ernandez Macedo and included presentations by Adilson Vaz Cabral Filho, Nico Carpentier, Pedro Cunca Bocayuva and Jurema Werneck. The second plenary panel was entitled “A dialogue between activists and researchers: What can we learn from each other?”, and chaired by Ana Lúcia Nunes de Sousa. This panel mostly focused on the favela a site of knowledge production, and the struggle over more respectful representations of the favela and its inhabitants, also in academic texts. Speakers were Renata Trajano, Fransergio Goulart and Alan Brum Pinheiro. The fourth speaker, Gizele Martins, could not leave her house because of security issues, and her voice was included in the panel through a message, which was read aloud.

In the two afternoons, there were 10 panels, organised in three parallel flows, on “Communication and human rights”, “Communication and education” and “Dialogical Communication and media-activism”. Over 40 researchers and students presented and discussed their work during these parallel sessions. The format that was used consisted out of a very brief introduction of the work/project by the author(s), followed by intensive discussions. The first conference day also included a session where the new open access journal Revista de Comunicação Dialógica (RCD) was launched. This journal can be found at http://www.lcd.uerj.br/index.php/category/rcd/.

Most of the presentations were in Portuguese, with some presentations in Spanish and English. The organisers invested in having an English/Portuguese translator, Thaís Abreu Vianna, on site. The entire seminar was also documented by a photographer, Jéssica Melissa Lima Borges. Furthermore, the organising committee of the seminar, consisting out of Adilson Vaz Cabral Filho, Ana Lúcia Nunes de Sousa, Luana Inocêncio, Nico Carpentier and Marcelo Ernandez Macedo was assisted by a team of volunteers, which included Tainá Moraes, Adrian Busch Pereira Costa, Maria Aline Sabino Nascimento, Lais Carvalho, Larissa Melo, Jaqueline Suarez, Luany Galdeano and Luis Gomes.

The organising committee was very pleased with the academic quality of the seminar and the presentations, and decided to investigate the possibilities of transcribing, editing and publishing the two plenary sessions, either as an edited book, or a special journal issue.