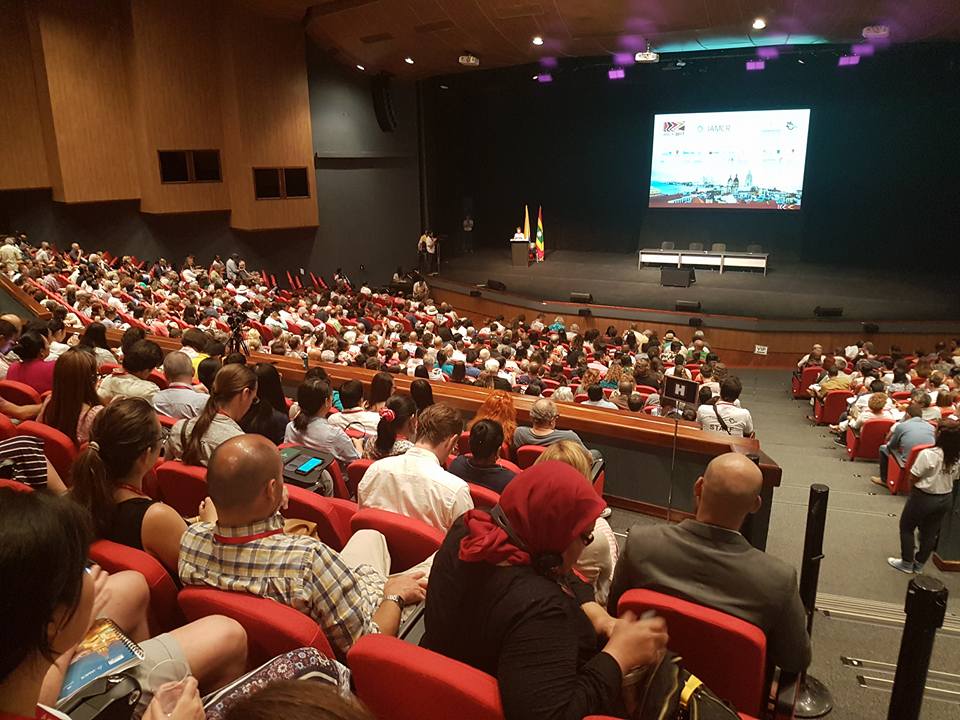 In this page we are collecting links to videos, photos, articles and other information about the 2017 conference in Cartagena, Colombia. This is a work in progress. If you have anything to add to the page, please send it to membership [at] iamcr.org.

Videos of the Opening Session

After welcoming comments, Omar Rincón (Universidad de los Andes, Colombia) offered an overview of Latin American communication and media research, drawing on the 20th century Martin-Barberian map of communication and calling for new and different discourses and concepts. Also, he shared the recording of a recent interview with Jesús Martín-Barbero.

The session concluded with presentations of the 2017 IAMCR awards.

Videos of the Closing Session

The 60th anniversary of the IAMCR was celebrated with music, memories, and mirth. The past was celebrated and the present critiqued by Roque Farone (from Uruguay and one of the founding members in 1957), Kaarle Nordenstreng (Finland), Cees Hamelink (The Netherlands), and Robin Mansell (UK/Canada).

The 2018 IAMCR conference in Eugene, Oregon, USA, was presented by Gabriela Martinez (University of Oregon, US). The theme of the event will be “Reimagining Sustainability: Communication and Media in a Changing World,” and will take place June 20-24, 2018.

The session concluded with a celebration of the 2017 conference, with thank yous from the IAMCR to the conference organizers.

Media and Social Media: Meeting the Issues of Terrorism and Violent Extremism

Videos of the Special Session - International Panel on Social Progress

New Mutations and Territorialities since the MacBride Report. A Discussion of the Chapter on Media and Communication of the International Panel For Social Progress

Issues related to freedom of expression and regulatory frameworks were featured in this session, which was chaired by Gustavo Gómez (Uruguay) and included presentations by Nick Couldry (UK), Joana Varon (Brazil), and Germán Rey (Colombia).

How to build up communication bridges between the North and the Global South?

A Thank you! video produced by the Participatory Communication Research Section

Hundreds of pictures of the conference are gathered in Flickr, grouped by day.

This year, 20 travel grants have been awarded to early-stage scholars. Some of them have sent their comments and reflections on their experience in IAMCR 2017 in Cartagena. Click on their names to read their comments.

Other reflections and comments